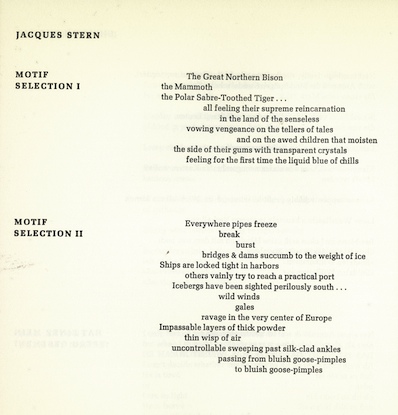 The Great Northern Bison
the Mammoth
the Polar Sabre-Toothed Tiger…
all feeling their supreme reincarnation
in the land of the senseless
vowing vengeance on the tellers of tales
and on the awed children that moisten
the side of their gums with transparent crystals
feeling for the first time the liquid blue of chills.

I sometimes stutter to keep time
With the inferno’s unnoticed beat,
In the still of the half-conscious mood.

I sometimes repeat the similar sounds
Ushered by the tempting silence of a winter’s layer
Covering the bristly mats forgotten in a storm.

I sometimes mumble the polytones
Of an empty craving within the frame specter
Holding court with the gallant rhymes.

I sometimes wonder if the whirrs and tears
Shall rip the surface of my dreams
And force through a grace all their own.

I sometimes wait for lapses of my speech
As signs of regained creation,
Before the shadows melt into line of view.