Author of Books on Brion Gysin and the Dream Machine 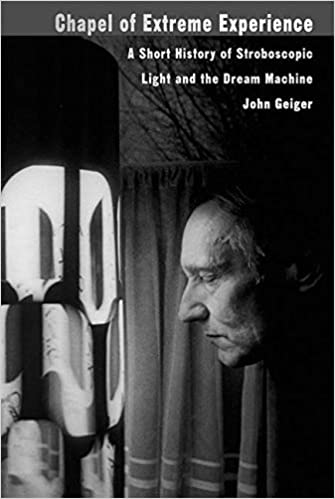 John Geiger is the author of four books. His first two concerned Arctic exploration. His next two, Chapel of Extreme Experience: A Short History of Stroboscopic Light and The Dream Machine and Nothing Is True – Everything Is Permitted: The Life of Brion Gysin, concerned the Beat movement. In an age when many authors opt for specialization, publishing book after book on the same topic, the range of Mr. Geiger’s publications might strike the casual observer as odd. Here’s a guy who is a Governor and Fellow of the Royal Canadian Geographical Society. What’s he doing writing about the Beats?

Impressed by the Gysin biography and curious to know more about the juxtaposition of Mr. Geiger’s interests, RealityStudio prepared the following interview questions and Mr. Geiger graciously agreed to respond.

RealityStudio: What first drew you to study Brion Gysin, William Burroughs, their peers and their era?

Geiger: I had written two books concerned with geographic exploration, and — at the time — didn’t want to write a third. I was interested in Gysin and Burroughs both as another kind of explorer, of inner space… I was also intrigued by the idea that someone like Gysin, a bohemian, gay, had come from Edmonton, Alberta, which was a small conservative town in the 1920s. He was such a fascinating creature, Brion: how is it that such a barren landscape — then — could produce such a harvest? But the idea for the book came from a lovely guy, James Grauerholz.

RealityStudio: How did you come to be fascinated enough by the dream machine to write an entire book about it? Have you experimented with a dream machine yourself?

Geiger: My interest in flicker grew out of research into the life of Brion. I started to investigate the claim that there was actual science behind the Dream Machine, that it was something more than a revolving lampshade. It’s true: it is possible to experience an altered state of consciousness with the flick of a switch, and what’s more light at intervals of 8 to 13 flashes per second can potentiate certain drugs. There was also this amazing cast of characters, people like W. Grey Walter, John R. Smythies. So I decided there was a separate book in it. I am a Dream Machine user and experience the most common response, colour, pattern and movement.

RealityStudio: You interviewed Burroughs for your books on Gysin and the dream machine. What was it like to visit Burroughs? Was it your research that brought you to him, or had you met him previously?

Geiger: Burroughs is branded on my memory. He could have lived a very different life, and he knew it. His alter ego was a crooked sewer commissioner. Thank God for the Ugly Spirit that Gysin once glimpsed through a hashish fog, that Thing that inhabited Burroughs and ruined and saved his life. He really was that which he attributed to Gysin: “An alien eruption.” He didn’t fit the stereotype. No black jeans. No Turkish cigarettes. He recited Robert Service to me, not Ginsberg. He asked me about Canada’s gun laws. I tried to explain the rationale behind the registry, his answer came straight out of the NRA handbook: “Registration is the first step towards seizure.” He showed me a handgun he kept under his pillow, explaining he’d been “threatened by lesbians.” He asked me all about the Arctic, where I have been fairly often: He wanted to know about the insects there.

RealityStudio: Did you ever meet Gysin?

Geiger: Never did. Burroughs thought that a good thing. He said no one came away from meeting Gysin feeling ambivalent. He said I would have either loathed him or loved him, and neither was appropriate in the circumstances. But of course I wish I had met him. Gysin died in 1986.

RealityStudio: How did you find the experience of writing a biography of someone who passed away relatively recently? Did friends or relations pressure you in any way or discourage you from writing frankly about Gysin?

Geiger: Gysin was a mythomaniac, so the hardest part was cutting through all the bullshit and that process was not always helped by his old friends. I had one of his acolytes tell me in hushed tones that Gysin had been CIA. Yeah right, the CIA’s going to recruit a rapacious gossip as an operative. Good cover though: gay, druggie, avant-garde artist. Couldn’t hide his moods, little more a state secret. Nobody’d ever guess that he was really passing the goods to Uncle Sam.

RealityStudio: Do you have any particularly memorable moments from your meetings with Burroughs? Any quotable quotes?

Geiger: Here’s one: “The thought is the strike.”

RealityStudio: Burroughs often professed his admiration for Gysin. Your biography gives a lot of insight into the productive years of friendship between Burroughs and Gysin, but it also suggests that in later years even Burroughs felt that Gysin’s work was something of a failure (e.g. Burroughs never liked the NL screenplay; Burroughs only wrote an introduction for The Last Museum “despite his own very real misgivings”; etc.). Did you sense that Burroughs had grown disappointed in his mentor?

Geiger: Not at all. Burroughs retained an immense respect for Gysin right to the end. He thought, however, that Brion was a better painter than writer. He feared that Gysin wrote with his tongue in his cheek and he’s right.

RealityStudio: Do you have any general thoughts about why Gysin’s work has failed to achieve much renown, in spite of its great influence on Burroughs and others? Do you think it deserves to be more highly considered?

Geiger: I think Brion Gysin will be much better known in a hundred years than he is now. It’s going to take a while to catch up.

RealityStudio: Finally, are you planning any further books or research on Burroughs, Gysin, or the Beat movement?

Geiger: I have a few ideas but nothing imminent. I am just in the process of finishing a book that combines two of my interests, geographic exploration and altered states.

Published February 2006. Many thanks to John Geiger. You can learn more about Mr. Geiger by visiting his web site at johngeiger.co.uk.
Brion Gysin Dream Machine Editor Interview William Burroughs

2 thoughts on “Interview with John Geiger”