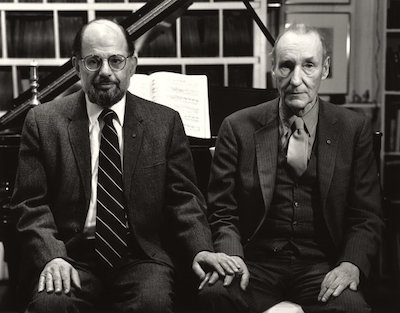 Hank O’Neal is a photographer well known for his jazz and portrait photography. He collaborated with Berenice Abbott for many years, and also befriended many of the writers of the Beat generation. His portraits of William S. Burroughs, Allen Ginsberg, and others can be seen on his web site.

Abrams/Image will be publishing a new book of his photographs entitled Gay Day: The Golden Age of the Christopher Street Parade 1974-1983. The book chronicles the development of the gay pride parade in New York City’s Greenwich Village. The book includes a never-before-published preface by William Burroughs, and many of the photographs in the collection were captioned by Allen Ginsberg.

In advance of Gay Day‘s publication in Spring, 2006, RealityStudio sent some interview questions to Mr. O’Neal. He was kind enough to take the time to answer them.

RealityStudio: How did you come to know Burroughs?

O’Neal: In early 1984 Allen Ginsberg told me that William Burroughs was coming to New York for a week of celebrating his 70th birthday. He was looking for a place to stay and did I know of anything. I suggested that if he’d like, Shelley (my soon to be wife) would be happy to turn over our floor at 830 Broadway to William and his pals and we’d camp out at her uptown apartment. This seemed to work for William and I first met him the day he moved into my house for a week. He arrived on 4 February (Saturday) and was here until 10 February.

RealityStudio: Burroughs was himself an artist as well as a writer. Did you have discussions with him about visual aesthetics, techniques, principles, etc? Do you recall the substance of any of those conversations?

O’Neal: William had a terrific visual sensibility but in 1984, William was not as active as a painter in the early 1980s as he became later in the decade, i.e. 1988 – 89. We had no conversations about visual aesthetics.

RealityStudio: Was Burroughs an influence in any way on your photography?

O’Neal: I had been taking photographs for some while when I met William and the extent of his influence was that he became a subject of many of the pictures.

RealityStudio: Your forthcoming book of photographs, Gay Day: The Golden Age of the Christopher Street Parade 1974-1983, contains previously unpublished captions by Allen Ginsberg and a preface by Burroughs. Was this project prepared a long while ago and delayed for some reason?

O’Neal: Gay Day: The Golden Age of the Christopher Street Parade 1974-1983, which Abrams/Image will publish in June 2006 contains about 150 previously unpublished photographs, as well as 125 previously unpublished poetic captions for the photographs by Allen Ginsberg. William wrote the preface shortly after he became aware of the project when he stayed at 830 in February 1984. He saw some of the pictures and thought it was a terrific project. The book was seriously delayed because of outright hostility from many publishers to the project in 1984. All of us had other projects and we just moved on. I was aware the time would come when these photographs with Allen’s captions and William’s preface would become widely accepted and that time has now come. Abrams/Image is very excited about the book and plans to publicize it widely.

RealityStudio: You’re best known for your work with musicians. What was your interest in shooting the Christopher Street Parade?

O’Neal: In 1972 I built a recording studio at 173 Christopher Street. In those years the parade formed in my front yard, the wide stretch of Christopher Street between Washington and West Street. Walker Evans had once told me he started out taking pictures in his back yard, so I didn’t see anything wrong with taking pictures in my front yard. It was visually very interesting, full of energy and good times, an ideal project. Berence Abbott used to always tell me to get a good project and work on it. This seemed like a very good one and I pursued it until 1983.

RealityStudio: Do you recall Burroughs and Ginsberg being interested in the parade? Did they ever march in it?

O’Neal: I don’t believe Allen or William ever marched in the parade. They never mentioned it to me and I’m pretty sure Allen would have as he was captioning the photographs.

Published November 2005. Many thanks to Hank O’Neal. Gay Day is due on bookstore shelves in June, 2006.
Editor Homosexuality Interview William Burroughs