It is an acknowledged paradox at the heart of William S. Burroughs’ work that his greatest books called into question how much they were even his. Whereas Samuel Beckett tried to eviscerate the novel from within — to “naughten” it, to borrow a term from Heidegger — Burroughs seemed to do the same to authorship as such. Friends and chance helped to assemble his masterpiece, Naked Lunch, from fragments he claimed not to remember writing. In the 1960s he advocated mechanical procedures, the cut up and the fold in, for composing literary works. Throughout his career he liked to collaborate with other artists. (You imagine teachers writing “plays well with others” on the report cards of young Bill.) And of course many of his works wouldn’t have seen the light of day without the early boosterism of Allen Ginsberg and the later support of James Grauerholz. It’s as though Burroughs himself were rather like the drug yagé: a source of brilliant visions unable to be realized without an added ingredient to potentiate them. Burroughs might have achieved little without the literary catalysts in his life: Ginsberg, Gysin, and Grauerholz. The three Gs. 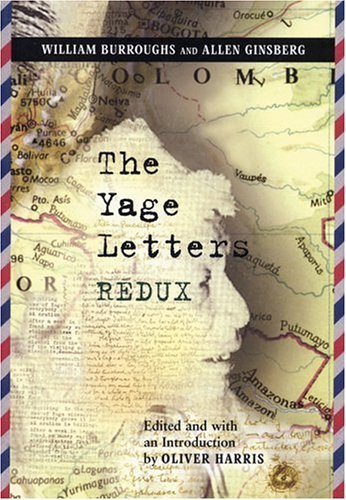 Given that Burroughs established this approach — not the composition of books but the decomposition of authorship — early in his career, it is not alarming to see his books continuing to be revised since his death in 1997. First Grauerholz and Barry Miles issued Naked Lunch: The Restored Text in 2001, and then Burroughs scholar Oliver Harris published Junky: 50th Anniversary Definitive Edition in 2003. Now Harris presents The Yage Letters Redux, a rigorously edited, researched, and analyzed version of the book that earlier editions called an “epistolary novel” emerging from Burroughs’ 1953 trip to South America in search of the purportedly telepathic drug yagé.

Like the first two revisions, Yage Letters Redux makes minor corrections to the text and adds previously unpublished material in appendixes. Harris has been careful to document his work in notes — a scholarly virtue that should also have been maintained in the “restoration” of Naked Lunch, especially since it is clearly Burroughs’ most important creation. Unlike the first two revisions, however, Yage Letters Redux is the only book to emerge as practically a different work altogether. Try this experiment: read your old edition of Yage Letters, next read Harris’ introduction to the new book, and then read the rest of Yage Letters Redux. You’ll find that Harris has practically recast the entire book with his introduction alone.

To be clear, this is not an act of academic hubris but rather a scholarly achievement. Harris did a marvellous amount of research, one of whose jewels was the discovery of the diaries of Paul Holliday, a botanist who ran into Burroughs in 1953 and described him as a “tall, lank, droopy sort of person with a pessimistic streak for conjuring up all manner of fearful fevers.” Harris situates Burroughs’ adventure in numerous contexts, both literary and historical, and argues that Burroughs was not just a “comically underprepared” oaf lumping through the jungle but rather a serious if unconventional researcher. “It turns out,” writes Harris, that “in June 1953 Burroughs was making the most accurate classification to date — ‘Indeed, the first real botanical achievement in the scientific appraisal of ayahuasca since Spruce’s seminal work in the 1850s’ — since he was the first to identify the genus of the plant now more correctly classified as Psychotria viridis.”

This background is important to situate the work, but it is Harris’ research into the composition of Yage Letters that forces the reader to reconceive the book altogether. Based on a careful analysis of manuscripts, correspondence, and documents in City Lights’ archives, Harris discovered that this “epistolary novel” is more novel than epistle. “Contrary to all assumptions,” Harris writes, Yage Letters “did not start out as real letters or edited letters or any kind of letters at all.” Instead, Burroughs had originally made several attempts to draft a saleable article — similar to his later attempt to write a “letter from Tangier” for the slicks — which was eventually cut up into letters as a way of providing a loose framework for disparate material.

This is an amazing revelation. It has long been known that great chunks of Naked Lunch were extracted from Burroughs’ letters to Ginsberg. Now it emerges that the vast bulk of yagé “letters” were the opposite, a pseudo-correspondence distilled from an attempt at more purposeful prose. If the letter format had previously given readers the impression of immediacy, as though they were receiving Burroughs’ dispatches from the jungle, Harris’ scholarship forces them to reconsider the book as a carefully contrived literary work, one of whose aims was to provide an impression of immediacy. When transforming the aborted articles into “letters,” for example, Burroughs sometimes changed verb tenses to heighten the action.

The craft — hidden in plain sight, like Poe’s purloined letter — of Burroughs’ “correspondence” emerges clearly if you compare it to the few actual letters remaining in the book: Ginsberg’s 1960 letter recounting his own experience with yagé; Burroughs’ portentous, pretentious reply (bear in mind Burroughs was writing as a spurned lover); and Ginsberg’s brief 1963 letter addressed “To Whom It May Concern,” as though the sender were no longer sure of the person the recipient had become. Of these, Ginsberg’s yagé account is the only letter of substance, and it tends to remind you of meeting somebody at a party who regales you with some endless narrative of a drug trip. What could be more tiresome? After bearing with Ginsberg’s hallucinations, it is a relief and a pleasure to read Burroughs’ precise and laconic descriptions. In fact, only in contrast to Ginsberg does it occur to you that Burroughs writes very little about the cognitive effects of drug experience, usually conveying it through a list of physical symptoms instead: vomiting, numbness, disorientation. “I was hit by violent, sudden nausea and rushed for the door hitting my shoulder against the door post.” This detail — stumbling into the door — seems to say more about yagé than Ginsberg’s ravings about a “Nose-God.”

Ironically, while the yagé experience dominates Ginsberg’s letter, it is less the experience than the idea of yagé that seems to motivate Burroughs. Harris reminds readers that Burroughs’ narrative — which consists mostly of nothing special: getting drunk, waiting for airplanes that never arrive, coping with visa hassles, sitting in parks, picking up “boys” and tolerating their petty thievery — is “far more about the misadventures of searching than the finding,” and you wonder if this wasn’t true of Burroughs in general. He roamed the world, tried every drug, dabbled with crime, flirted with scientology, loved numerous men, boys, and even a few women. Was it all in pursuit of some “final fix,” as Burroughs put it? God’s Own Medicine? Certainly his books never seem to attain finality or fixation, even posthumously, thus leaving readers to undergo their own misadventures in seeking and finding. Perhaps this even helps to explain their appeal — what could be better than opening up this incredible new edition Yage Letters and discovering a practically “lost” or recovered book by a favorite author?