The “Abstracts” As an Attempt to Write the Immediate Image

The “Abstracts” of 1969 are a series of seven writing experiments which William Burroughs developed in the writing of his novel The Wild Boys. He published these “Abstracts” that year in small-press journals and underground newspapers, his usual testing ground in the 1960s. Their unusual format of careful juxtaposition is already familiar to anyone who has read The Wild Boys. Added to the five “Abstracts” found in The Wild Boys (actually six Penny Arcade Peep Shows / “Abstracts,” if you include the reprint of an “Abstract” first published in the journal Intrepid), the number of published individual “Abstracts” comes to twelve. 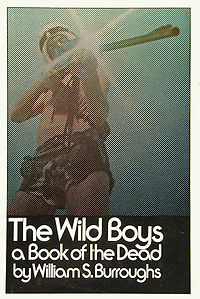 Burroughs provides an introduction to what the reader is viewing in The Wild Boys, as Audrey enters the Penny Arcade Peep Show and seats himself in front of the four screens on which films are being projected: “Audrey looked at the screen in front of him. His lips parted and the thoughts stopped in his mind. It was all there on screen sight sound touch at once immediate and spectrally remote in past time.” This bit of framing is absent in the “Abstracts”. However, it is clear that they are pieces designed to silence the reader and make him think without words, to think only in images. The language is not there to provide meaning, but to provide pictures in the mind. The “Abstracts” are as close as Burroughs could take the English language towards being purely visual without literally drawing it all out.

Burroughs’ obsession with the power of visual writing systems, such as Mayan and Ancient Egyptian hieroglyphics, comes out of this desire to convey meaning without the use of words. In The Third Mind he writes about hieroglyphics, “If you are able to look at what is front of you in silence, you will be able to write about it from a more perceptive viewpoint. What keeps you from seeing what is in front of you? Words for what is in front of you, which is not what is there. As Korzybski pointed out, whatever a chair may be, it is not a ‘chair’.” The “Abstracts” are Burroughs’ attempt to do the same with the English language through the device of writing a brief summary of an abstract film. (It is perhaps a subtle play on the typical scientific “abstract,” usually a brief overview of a longer paper or thesis, and at the same time an abstract film made of cut-ups, cut-ins, and jumping images.)

Throughout the 1960s, Burroughs dabbled in making / writing films and sound recordings, presciently seeing that the lines between film and the written word were fairly blurry. Many things you can do with film can also be done with words. His cut-ups during this period are an example. As he says in The Job, “Cut-ups have been used in film for a long time. In fact films are assembled in the cutting room. Like the painter film technicians can touch and handle their medium move pieces of it around and try out new juxtapositions.”

Burroughs explored this concept cinematically through his relationships with Antony Balch and Ian Sommerville. Though not all of them were cut up, Towers Open Fire, The Cut-ups and Bill and Tony are films that play with sound and image to explore what it means to see, hear, and experience. This was exactly the point of cutting up texts and films, and the “Abstracts” are just another extension of the experiment. They are each a small film made up of flashing imagery and short, quickly cut scenes reminiscent of the films Balch was making with Burroughs at this time.

There were other artists in the 1960s making films that are amazingly similar in visual imagery to what Burroughs was writing. The films of Stan Brakhage and Bruce Conner are filled with cut-ins and disjointed imagery. Conner in particular, in his 1958 film A Movie, uses stock footage of war atrocities of the type we see described the “Abstracts.” These films use the aesthetics of German Abstract filmmakers of the 1920s, but with the post-war imagery that Burroughs exploited so effectively.

The abstract films of the 1920s point forward to the imagery found in Burroughs’ “Abstracts.” Hans Richter’s 1923 film Rhythm 23, for example, almost seems to be the very film Audrey sees as he sits in the chair in the Penny Arcade. Shapes move in towards the screen and then recede again. (“Objects and scenes move away and come in with a slow hydraulic movement always at the same speed” — The Wild Boys). New shapes come in, other shapes evolve into something, all of it in total silence. (Rhythm 23 was made before the sound era.) One has to wonder whether Burroughs saw the film. Given his favorite number in the title, he would certainly have considered this an intersection point.

This use of visual imagery and cutting away were new techniques in Burroughs’ effort to “rub out the word.” They lead the reader into silence as the images convey meaning without causing the formation of words in the mind. The shift from cutting up narrative imagery to describing cut-up, film-based imagery shows the evolution of Burroughs’ writing at this point in his career.

The “Abstracts” are as follows:

It is easy enough to say what the “Abstracts” are. It is clear that they are the overflow of Burroughs’ work on The Wild Boys and one of his many attempts at exploring different perspectives in his own writing. (There is only one “Abstract”-like part in Port of Saints. See pages 26 – 27. It is questionable whether this was once an “Abstract” or just Burroughs using the tempo of the “Abstract” for a few paragraphs. Exterminator! has no “Abstract”. Also see The Job pages 191 – 193 for an extended treatment of the idea behind the engram and the reactive mind in a very “Abstract”-like format.) The larger question, however, is why Burroughs bothered with them at all? Why include them as a consistent theme in The Wild Boys? They have an almost confusing effect, stuck in the middle of the text, jarring the reader out of the relatively straight narrative, a form to which Burroughs was returning at that point in his career. They do not greatly add to the story, nor do they offer more information about the Wild Boys.

Strangely, however, they do provide a consistency to The Wild Boys which it might lack if they were not included. Barely a novel, the book was made from some of the same material as Exterminator! and Port of Saints. Without the Penny Arcade Peep Show chapters to constitute an odd backbone for The Wild Boys, it is likely that the book would seem as fractured as Port of Saints, but with the disparate feel of Exterminator! due to the fact that included pieces are basically not connected in any real way. Audrey, the principle character of The Wild Boys, does recur throughout the book, but he is not a more prominent character than any of the others until late in the book. Only as the novel ends does the repeated mentioning of the Wild Boys as urban guerilla groups of young boys begin to take shape.

The “Abstracts” are important to The Wild Boys, but also as individual pieces in themselves, because they mark an important point in Burroughs’ work. At this time he was moving away from the cut-ups that defined his early work of the 1960s and towards his somewhat unique version of straight narrative, while still maintaining the philosophical need to fracture language and explore new possibilities. The “Abstracts” are not cut-ups in terms of language, but they are in terms of form — specifically, the medium and language of film. The attempt to write the immediate image and push words from the mind of the reader through the use of words is in part a logical end to the progression of the cut-ups of the early half of the 1960s, which was explored through film as well as through writing. The “Abstracts” mark an important transitional phase between the early experimental work and what may be called the more or less straight narrative of the Red Night trilogy which would occupy Burroughs for most of the 1970s and 1980s.