“He was the first person who was famous for things you were supposed to hide — he was gay, he was a junkie, he didn’t look handsome, he shot his wife, he wrote poetry about assholes and heroin. He was not easy to like.” — John Waters, the Pope of Trash, on WSB, the Pope of Dope.

When the new-clear-eyed-art nuclear bomb that was Naked Lunch exploded in 1959, killing literary traditions and old modes of expression, its radioactive fallout continued until William S Burroughs’ death in 1997. By that point the man’s rap-sheet rep had been long established: homosexual rights pioneer, junkie, wife-killer, teenage boy lover, terrible father, gun lover, avant-garde iconoclast icon, advanced and muddled scientific-cum-magical thinker, experimental jack-of-several-artistic-trades, etc etc. His image has been set in opaque opiate sleaze-stone for decades now, but there’s only one thing wrong with it: it’s not really the truth at all. Or, more specifically, the image forms only one part of the truth. It’s fixated on the man fixing up and mixing up literary tradition, distracted by his away-with-words way with words. But lying behind all the bluff and bluster and marijuana smoke and shattered internal mirrors lay a real living feeling human being, a man trapped within his mythical counter-cultural-tornado image and far removed from its worst excesses and exaggerations and lies.

Enough time has obviously elapsed for younger artists away from ever-receding WSB Epicenter Central to be able to examine El Hombre Invisible as a suddenly visible capital H (for) Human (not Heroin) entity, to hesitantly-but-ever-more-forcefully begin to restore a humanity to the tragic-life writer he often lacked when he was alive — much of the time through his own obscuring-smokescreen doing. This process began on film with the recent excellent short The Japanese Sandman by Ed Buhr. That production presented a fake “letter” from The Yage Letters in sensitive, revealing style to examine the often overlooked maudlin, sentimental, melancholic aspect of Burroughs’ writing. And those aspects are there, they truly are, albeit buried under strata of sex and drugs and madness. Judging by the tragic painful horrible life the man lived, why wouldn’t they be? The outstanding new documentary William S Burroughs: A Man Within by 25-year-old director Yony Leyser continues this excavation and examination of William S Burroughs’ behind-the-mask humanity in spectacular educational and inspirational form. If you ever thought there was no more mileage to be gained from WSB and expository films about him, think again. I personally had wondered for years when somebody was finally going to go beyond the crazy-smackhead-god bullshit and talk about Burroughs as a human being first and foremost, and finally somebody has done it.

A Man Within starts off in knowing wry sardonic mode, with Burroughs’ otherwordly voice reading from Naked Lunch inviting us carny-huckster-style inside the running time to witness The Complete All-American Deanxietized Man. Of course, given the author under discussion, we see nothing of the sort. Putting it mildly. What we do see is a fairly comprehensive encapsulating of WSB’s private life and loves and hates and fears and art. Newcomers to the anti-writer writer’s artistic oeuvre will find this an excellent introductory springboard to jump off into his multiple-media creations, and seasoned afficionados of his work will find plenty of thought-provoking new material to fill gaps in their own understanding and view of him and his methadone-methodology wordwork. All the major life-tropes and threads are present and (occasionally deeply unpleasantly) correct here: his privileged upbringing, rebellion against 1950s middle class mores, the Beats, his horrific killing of his wife, the tragic death of his son, lifelong drug addiction, literary experiments, etc.

Peter Weller, who essayed WSB surrogate William Lee in David Cronenberg’s 1991 film of Naked Lunch, sporadically narrates (and stars in, replete with huge Freudian cigar) a laser-precision trip over the 83 years of the writer’s existence. Interspersed with superb wire-sculpture stop-motion animations we are treated to a counter-cultural rogue’s gallery of the usual unusual suspects to contribute bone-fleshing-out anecdotes and musings on the Midwestern junkie’s life and their shooting-under-the-skinteractions with him. David Cronenberg talks about working with the writer. Jello Biafra gives examples from his exemplary Dead Kennedys work of how he was lyrically influenced by the cut-up method, as does a hilariously madly ranting Iggy Pop, who is probably wearing a Stooges t-shirt to remind him of who his old band were back in days of more-braincells yore. Biographer Victor Bockris madly flaps his arms like Hunter S Thompson fighting off invisible bats and pontificates on homophobia in the 1950s and Burroughs’ impact on same. V Vale talks of WSB and his Harvard education and Shakespeare. And on and on. What is clear by the caliber of the musicians, filmmakers, writers, etc, interviewed, is that Burroughs influenced a great many people in a great many artistic disciplines — and of course continues to do so. What’s even more interesting to note, and this is very clearly drawn in the film, is just how cross-generational El Hombre Invisible’s work was and is — from the Beats to the hippies to the punks to grunge to the young artists now picking up and dusting off his artistic mantle. Anybody in the last half century with a bone to grind or an axe to pick seems to have gravitated towards the inescapable black hole of his iconoclastic rebellion almost automatically whether they initially know it or not, his influence has been so widespread and long-lasting and unassailable. 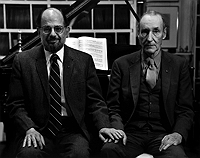 “And I think that that disappointment that he had when he did fall in love, which was so rare for him, made him a lot more withdrawn sexually and emotionally, a lot more afraid of being vulnerable and then being hurt” — Genesis P-Orridge, a wo/man who knows a thing or two about being hurt in love, on William S Burroughs.

Quite apart from anything else, I think what makes this documentary such an sterling piece of work is the deep and seemingly almost effortless insight it gives us into the love(less) life of the writer it examines. I had always been personally fascinated and confused by William S Burroughs as a (maybe un)feeling human being first and foremost, wondering what sort of person and personality hid behind such a formidable volatile and inviolable manufactured-persona wall. This film answers that question, at least for me: a truly lonely and damaged and confused individual barely capable of sustaining a loving relationship with another human being any age or sex, from wife to lovers to son.

A deeply shy and tragically schizoid man within the myth is sketched by expertly chosen clips of Burroughs speaking. I found one clip above all others to be highly illuminating. It shows the paranoid writer talking to a woman in what seems to be a public Q&A.

As you’re letting yourself open to experience, and that’s the only way you can experience it… but there’s also a danger of letting yourself open to something that is very injurious. When you let your immunity down there, and you can get AIDS, that’s always been a problem of being receptive, but at the same time able to defend yourself against injurious attacks and influences. Because they are sure to be there. It’s like a disease organism.

Whether spoken during the heights of the AIDS era or not, you’d have to say that these are injured, frightened, cautious, depressing words. Burroughs, of course, came from a time when homosexuality was not above ground (JG Ballard said that he found the gay Midwesterner “impenetrable” when he met him, which you can take however you like), and no doubt some of his paranoid utterances and views came from rampant homophobia in the first half or so of the century.

But even this is not enough to explain interpersonal relationships as being compared to a “disease organism” (which, oddly, is very similar to the way WSB described words in general; when you are an artist who regards love and art as being pathogenic invasions, you know you’re in trouble) and to fully explicate why the junkie scribe would often employ rent boys to satiate his sexual desires. The sympathetic, insightful, melancholic P-Orridge notes that Burroughs did this so that, emotionally, there was “no danger of being embroiled beyond a controllable point.” No doubt some of the motivation behind WSB employing buff rough trade was that they reminded him to a degree of his early young failed attempts at same-sex relationships, with the likes of Prynne Lee Hoxie (whom Burroughs literary estate executor James Grauerholz, also insightfully interviewed in this film, has convincingly proved was the basis for the Billy Bradshinkel character from the aforementioned Japanese Sandman short — Hoxie died in a drunken car wreck in 1934) and Lewis Marker, both touched upon in the film. The tortured writer truly was a man fated to walk along alone in life, albeit with sustaining artistic and companionship-based relationships from significant others like Grauerholz and painter Brion Gysin. It’s actually tragic, and you wonder how much of Burroughs’ wish to stay wasted for most of his life came from a way to escape the internal eternal emotional conflagration he was suffering. But there’ll never truly be any empirical way of proving or knowing that.

There is a helluva lot more to A Man Within than (not particularly) simple discussion of Burroughs’ barren emotional life: we have a discussion of his love of guns (his gun dealer wryly notes that the ballistics junkie got a feedback high out of weapons “better than shooting heroin — you shot something else and it went bang!”), his artistic methodology, his snake obsession, his drug use and abuse, ad infinitum. I will leave the would-be viewer here to discover all the other material in the running time for themselves, because if you’re at all interested in William Seward Burroughs and his life and work (young friend of mine who knew nothing about the man found it enlightening and entertaining) you will simply have to see this labor of love (the director Yony Leyser shot it for peanuts over a period of several years, and the care and attention paid to, and obsession with, the subject matter shows and is infectious) when it gets a well-deserved release later this year. I’ve personally seen it several times so far, and will definitely be going back to it again for further repeat viewings. It’s much better than the other WSB-life-and-career-encompassing 1983 documentary Burroughs: The Movie (though it could use the hilarious annoyance and embarrassment on the writer’s face in that production when his brother Mortimer castigates him for the language used in Naked Lunch) because it’s further from the subject matter and thus can be more revealing and honest and not skimpily skim over any of the unpleasant aspects of its subject’s biography. The life and mind of William S Burroughs is a terrible and sometimes beautiful and inspiring thing to cinematically taste, and if it’s a wasted-writer flavor like that you want and need you’ll do no better than this fine new in-depth documentary.

43 thoughts on “William S Burroughs: A Man Within”