To my knowledge, no article on William S. Burroughs was published in Lithuanian language prior to 1998.

I happened to learn about William Burroughs around 1995 from the fabulous book on Jack Kerouac Memory Babe, a critical biography by Gerald Nicosia. Afterward I discovered a transcription of his interview with David Bowie published in the book The Bowie Companion. The conversation between Bowie and Burroughs was vivid, witty, filled with good ideas and still fresh despite the fact that the talk took place in the year 1971.

Instantly I had a wish to translate the whole transcript into Lithuanian. At the time I was getting into the collaboration with the old respected magazine on literature and visual arts Nemunas and already published there a study of Jack Kerouac’s On the Road based on how the novel was written. Surely I was inspired by the almost biblical book of Gerald Nicosia. But when I proposed translating the conversation between William Burroughs and David Bowie to the magazine, it was rejected. Most likely the editors were too old to know who David Bowie was, and for that matter they weren’t much more hip to William Burroughs.

Luckily, around that same year of 1997, I got a chance to get in touch with the leading weekly cultural newspaper Literatura ir menas (“Literature and Art”) which was also issued by the Lithuanian Writers Union in Vilnius. It had a few pages dedicated to the young reader and this became the breakthrough for the underground themes and novelty issues. This progressive part of the newspaper, titled “abroad,” was featured on the last page. In a three-week sequence in July 1997, the interview was published there with the title “The Father of the Beat Generation Meets the Rock Duke: William S. Burroughs talks with David Bowie.”

Once my collaboration with the newspaper was established, the next year we published the article “The Cut-Up Technique of William S.Burroughs.” (August 1, 1998)

One of the editors from the newspaper was captured by William Burroughs’ ideas and persona so he got the Russian translation of Junky, which was already published there and available in some of our local bookstores (which at the time still had huge amount of books imported from Russia).

Sure enough, since the Soviet times a lot of intellectuals were into the Beat writers and word was going round and passed on through the generations. Jack Kerouac was almost a national hero, because On The Road was published in Lithuanian translation as early as 1972! It made a huge impact on almost every non-formal or dissident writer of the Soviet decades and also on the future writers emerging from the counterculture. On The Road was a key catalyst in establishing such counterculture in Soviet Lithuania and inspired various movements such as hitchhiking (in Lithuania known by word “tranzas”), which is still a living tradition nowadays.

Allen Ginsberg was also famous in underground circles, some translations of his poetry were published officially, and amazingly enough Allen Ginsberg visited Vilnius himself in late 1985 (together with Arthur Miller) as part of an American writers’ delegation to the Soviet Union.

So it was only a matter of time before the great William Burroughs joined in. Eventually Junky was translated into Lithuanian and published by “Kitos Knygos” in 2009.

In my opinion, William Burroughs remains one of the favorites, an inspiration to whole new generations of intellectuals, keen-minded artists and writers here in Lithuania. As well the knowledge about him still comes both from literature and from indirect sources such as experimental and rock music.

The humble article of mine from 1998 (depending heavily on the interviews of Jenny Skerl) is published once again in the book on early American and British rock music and hip art Garso geles (“Sound Flowers”,  2012) and thanks to the generosity of your site it has remarkable illustrations — the first published cut-up of William Burroughs and also the cover of My Own Mag. 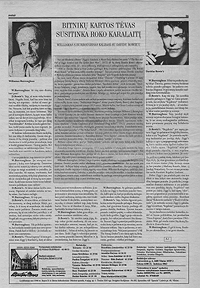 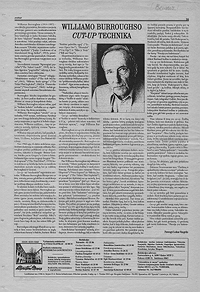