“Tears are worthless unless genuine, tears from the soul and the guts, tears that ache and wrench and hurt and tear.” — William S Burroughs, Last Words

Let’s face it, the familiar picture of William S Burroughs now pretty much fixed in the public consciousness is of the wife-killing, hat-and-glasses-wearing junkie with the lust for teen boys, his gravel-rolled burr gutter-muttering obscene scientific and medical prophecies to a wasted cheering audience. It’s nowhere near the whole picture, of course, but why let truth come in the way of a good, easily graspable and marketable image? 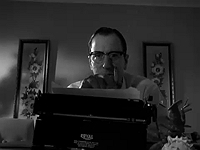 What’s especially frustrating about this cliché is that it completely ignores the fact that Burroughs was a human being who lived a pretty dismal life — drug addiction, killing his wife, his son dying in his 30s — and treats him instead as a sort of circus freak-cum-alien with no human or redeeming qualities whatsoever. To this way of thinking Burroughs was just the two-dimensional Hombre Invisible, the middle class drug-crash writing mad prose as he strode and staggered purposefully and notoriously down the still-divided-as-to-his-worth annals of literary history.

The neglected human, feeling aspect of the writer is one that is brilliantly and sensitively examined in The Japanese Sandman by director Ed Buhr. This new 12-minute short film is based on the first letter in The Yage Letters, WSB’s fictional book of letters (see Oliver Harris’ authoritative introduction to the 2006 edition for more information on this complex epistolary hoax) supposedly sent to Allen Ginsberg from South America during WSB’s 1953 quest for the hallucinogen yage. This was the mythical “final fix” used by brujos to paint vivid neon prophecies in the humid conspiratorial jungle air, and Burroughs likely wanted it as some sort of panacea to take away the mental and emotional torment that followed his accidental killing of his wife in 1951.

The Japanese Sandman starts off with a faded jaded 38-year-old Burroughs sitting clattering away at his manual Royal typewriter, film noir monochrome mirroring his scarred internal palette. Words crack and rattle across a surrendering gray sky shaking the leaves of vitality-leeched palm trees as the drug-addict writer composes a screed part travelogue, part routine, part anthropology, part sociology, back to Ginsberg in the USA. Not shying away from its subject matter, the film details WSB’s adventures in Panama with drugs and booze and hookers, and it’s clear by this point in his life that he is a cynical, weary individual who has been through the existential wringer.

Buhr conjures up Panama through a judicious handful of interiors and a few tight exteriors, married with a sterling fast-paced editing job, fine crisp evocative cinematography, and a great bouncing soundtrack. John Fleck, the actor who plays Burroughs, does an excellent job mimicking the writer’s unmistakable atonal voice, looks like him and even has his facial tics and tremors down to a tee. Fleck has clearly done his homework, though it must be said he still has all ten fingertips, so there obviously was a limit to what he was willing to suffer for his art! He looks like he’s having fun with the role as he runs with it, and there’s not really a bad performance in the film. 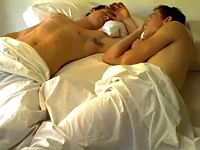 When a shady Panama joint called the Blue Goose reminds him of a Prohibition-era roadhouse from his youth, Burroughs tells the poignant story of Billy Bradshinkel, a lover from his late teenage years. It’s at this point that lusty vibrant color footage supplants the dreary black and white and Burroughs’ internal horizons are seen to be lush and warm and happy. He rewrites their initial sexual encounter in a car and talks about their young naïve relationship before being crushed as they break up. A few months later the writer is left numb when he learns that Billy has died in a car crash. Here we cut back to contemporary Panama and Burroughs promising he has a “silo full of queer corn” like this to recount, but it’s obvious his off-hand glibness is a mask for real pain and sadness. As Oliver Harris notes, having this “routine” right at the start of the book is important for motivating the quest into the jungle to find Yage “as an escape from haunting memories of home, family and desire.”

The Japanese Sandman is a lean, fat-free film, very faithful to the original fake letter it is based on, easily compacting the complex, poignant subject matter into its short, lively running time. The title itself (the letter has none) derives from a line from an old 1920 song of that name, and the line Burroughs quotes from it — “Just an old second-hand man trading new dreams for old” — provides, as he says, the “theme song of story.” Ironically, the writer misquotes the song, replacing the original word “days” with “dreams” by accident or by design, which helps to make his point about remaking painful memories artistically into pain-free images.

A real, heartfelt, melancholic piece of work, The Japanese Sandman is a very welcome addition to the ever-growing list of projects inspired by Burroughs. Ed Buhr has talked of creating a full-length film made based on this material. Let’s hope he manages to get it together, because Burroughs could use a bit of humanizing now that the initial culture shock of his art has died down. There may be nobody better suited for the job than this fine director with his beautiful and inspiring could-be-feature trailer.