Images and Recollections from the Memorial Service and Funeral

These images from the program offered at William S. Burroughs’ memorial service were originally reproduced online at the now defunct site BigTable.com. Luke Kelly, the proprietor of that site, has kindly agreed to let RealityStudio reproduce them here.

The images were originally provided by Dave Hull of Lawrence, Kansas, who wrote:

Burroughs passed away on 2 August, 1997, and the service was held on 6 August, 1997, at Liberty Hall in Lawrence. There was an open casket viewing, selections from Burroughs’ favorite music, a voice recording of Burroughs, a reading of Tennyson’s poem Ulysses by David Ohle, and closing remarks by James Grauerholz.

Lydia Ash sent RealityStudio these poignant recollections of the memorial.

My most vivid memory about the service was the appallingly disrespectful behavior of the (literally) unwashed masses who showed up in cut-off shorts and flip-flop sandals. Dave Hull and I were in funeral black — myself in a vintage 40s frock, he in a suit. It seemed that everyone seated around us in the balcony barely managed to pull on more than pajamas. It seemed most people attending the service viewed it as some sort of freakish entertainment opportunity. I was grateful that the family and friends of family sat below us in the floor seating of the hall and couldn’t see the balcony, or the people sitting in it, without some effort. The family was so generous to open the service to the public, and the public couldn’t bother to show them — or Burroughs — the respect they deserved. It was a pity.

However, I do remember good things: I remember the awe of walking into Liberty Hall, seeing the casket, and realizing my god, there lay the remains of someone who, I believe, surpassed (or perhaps, just ignored) what most of us consider human.

I remember the glorious discomfort of hearing Burroughs’ voice echoing in the hall, while seeing his body in the casket.

I remember the sadness of Mr. Grauerholz. I could feel his loss, all the way up in the balcony.

We were on the 1997 Phish tour, recovering from a grain alcohol night at a rest stop outside of St. Louis, when Burroughs’ funeral party pulled in. At some point Anne Waldman approached me and one of the other riders. She informed us of Burroughs’ death, then invited us to pay our last respects. At the time, the book Big Sky Mind: Buddhism and the Beat Generation happened to be circulating the van. Anne signed her section of the book, which included a picture of her and Burroughs. It was then that we were invited to the burial. I saw Patti Smith and Oliver Ray recite poems, at least I think they were poems. Burroughs was buried with three joints in his pocket.

After the burial we were invited to an art dealer’s house for the gathering (or party) that they were having for Burroughs in St. Louis. It was there that I had my first Cosmopolitan. We were in a maroon van, there were seven of us. My friend Chris had dreadlocks that stuck straight up in the air. My hair was in the process of dreading. I was wearing a purple and green skirt and a purple backless shirt. My boyfriend at the time was an incredibly handsome Argentian guy from Long Island. There was a black kid and some spaced-out blond dude. A chick with short hair and another chick who had to be 5’1″ with long blond hair.

I remember sitting by the pool at this beautiful house in St. Louis listening to a man talk about Jerry Garcia and the Grateful Dead party and what wonderful times he had with them. I remember being in this one room with an artist in circle of five maybe six, and watching him roll and smoke joint after joint like they were cigarettes.

Charissa distinctly remembers a photographer at the funeral party. Does anyone have any pictures of it? 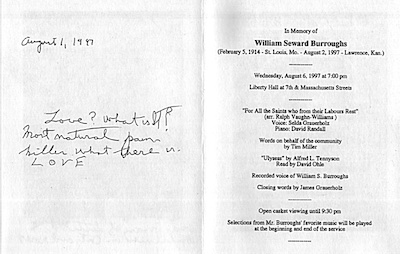 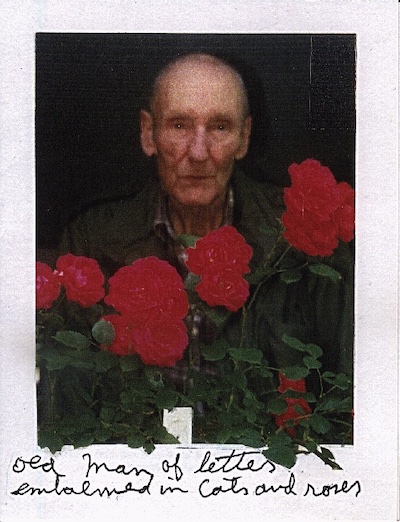 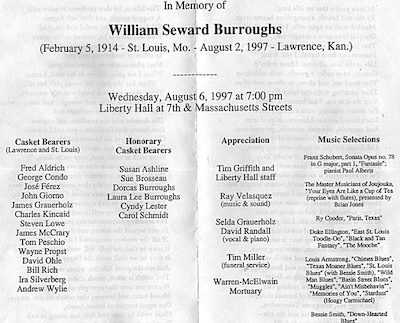