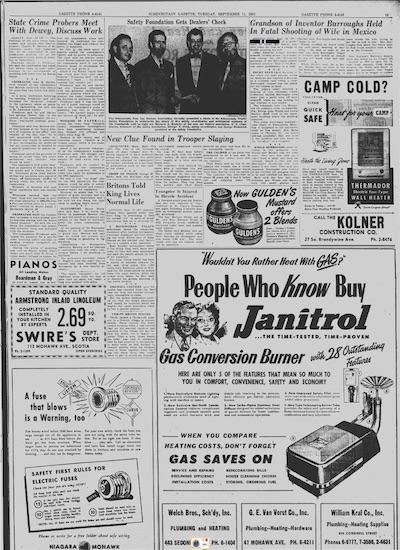 Grandson of Inventor Burroughs Held in Shooting of Wife in Mexico

Judge Eduardo Urzalz Jimenez ordered “formal prison” on a homicide charge for the 37-year-old grandson of the Burroughs adding machine inventor. That is the Mexican court preliminary to a trial.

Court officials declined to say when the next hearing would be. Mexican law requires a decision in a criminal case within a year. Burroughs’ counsel has not asked for his release in bond.

The judge’s order followed a hearing of two witnesses whose testimony backed Burroughs’ own story that a pistol went off accidentally while he was looking to see whether it was loaded.

The witnesses were two 23-year-old GI students from Jacksonville, Fla, Edwin John Woods and Lewis Marker. Both lived in the apartment building where the shooting occurred.

Two other Americans testified — John Healy of Minneapolis, Minn, that it happened in his apartment while he was absent; Mrs Bette Jones of Chicago, Ill, (no street address available), that she lived in the building and only knew of the “accident” as a neighbor.

While Burroughs stood listening n the prisoner’s cage, Woods and Marker told the same story: they saw him pick up a pistol from a table, pull back the carriage, heard a shot and saw Burroughs’ 27-year-old wife Joan slump in her chair. They said they supposed Burroughs was looking to see whether the gun was loaded as he had testified last Saturday.

Both said the four had been drinking gin, Woods and Marker only two small glasses each, Marker said. Burroughs had drunk “quite a lot.”

Woods testified he heard nothing said about shooting at anything. He said as soon as the shot was fired Burroughs “began to tremble and looked as though he did not know what had happened.”

While Marker went for a doctor, Woods said, he went to tell the landlady. When he came back he found Burroughs kneeling in tears beside his wife, trying to get her to talk to him. Mrs Burroughs died about two hours later in Red Cross hospital from a bullet in the forehead.