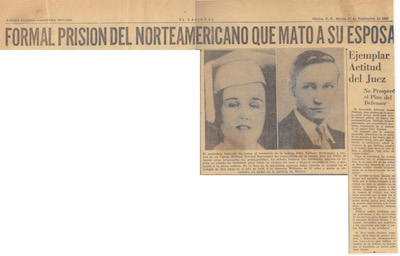 [ photo caption ] The scandal caused by the murder of Mrs. John Vollmer Burroughs [sic] by her husband William Seward Burroughs has shaken our neighbor country to the north, where the protagonists were from. Mrs. Vollmer was murdered when her husband, who was drunk, put a glass on her head and fired a shot which killed the young lady. The photo on the left shows John [sic] at the time of her graduation from the College of St Agnes in 1939. On the right is William, 37, who has been detained by the authorities in Mexico.

Exemplary Attitude of the Judge

Does Not Support the Defender’s Scheming

Although the defense intended to demonstrate in the course of seventy-two hours that the killing was accidental, there is a suspicion that William murdered his wife, because a year ago they were going to divorce “for lack of understanding.”

As the record shows, the events occurred in apartment #10 of the house at 122 Calle de Monterrey after the husband had been drinking in the apartment of a friend.

The husband declared, when the Red Cross was attending to his wife, that he had placed a glass of gin on her head and then, about two meters away, fired his pistol in order to break the glass. The shot was so poor that the bullet was embedded in the forehead of the poor woman, who was mortally wounded. She was taken to the Red Cross but died moments later.

Speaking to reporters, William gave his version of events, but then his lawyer Barnabé Jurado arrived and scolded him, telling him to explain to the reporters that it was all an accident.

Judge Irzaiz Jiménez, we repeat, issued a formal prison sentence, and given the strange circumstances surrounding the death of the woman, it is assumed that the wife killer is not to be released on bail.