The first time was in the 70s in Chelsea London.

In those days the Kings Road Chelsea was at the forefront of the new “Antique Markets” springing up in London.

It was a fashionable novelty to have a “stall” displaying your particular speciality.

The most exclusive of these was an emporium called Antiquarius.

The stalls were expensive and so were the items on display.

However, one large area in the bottom right hand corner let its first-class flavor down.

It was chaotic piles of books stacked on precarious-looking shelves or just on the floor.

At the back was a small office.

A white-haired, long-coated, chain-smoking American by the name of Dennis worked there.

I watched it from a distance, although over the months we got on nodding and then talking terms. It was a time in my life where anarchy was paramount and anything went. Dennis got a sense of this and I had an idea that we were, in our own ways, up to the same thing. 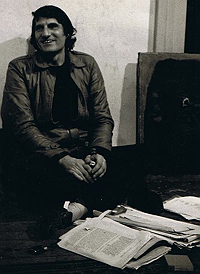 Alex Trocchi, the thick-set, chisel-featured man who used to use the office was his boss.

He was an infrequent visitor and at 25 years old I had no idea of his reputation.

Several years later just before he died I got to know Trocchi much better.

He told me at that time how this stall made money.

Dennis would get a keen client, Alex would type out a piece of his very good poetry or several pages from say Cain’s Book. The customer, mesmerised, would buy, thinking them unique parts of an original manuscript, at an extortionate price.

I once entered Antiquarius to find Dennis and Trocchi standing, smoking, with a well-lined, stooped bald man.

I was a little surprised at his ebullience and went over to shake his hand. Trocchi, whom I had met a couple of times, smiled wryly.

“This is William,” he said, pointing at the wraith-like figure at his side.

“Pleased to meet you,” I said.

He barely moved his hand but I shook it anyway. As I did so he looked at me in the eye. It was a cold stare and having completed his evaluation said directly: “You look like a guy who should never let them know who you are.”

“Why do you say that?” I mumbled, looking nervously over my shoulder.

He just grinned and turned to Trocchi simultaneously, as if I was no longer there.

Dennis winked and I moved on.

Six years later I saw him at an art opening in New York’s Soho and went over. I reminded him of our first encounter. At first he didn’t quite remember but smiled and spoke affectionately of Trocchi.

“But you know,” he said to me. “I wasn’t really meant to be in England at that time, so I don’t recall any of those meetings.”

He winked boyishly and was gone.