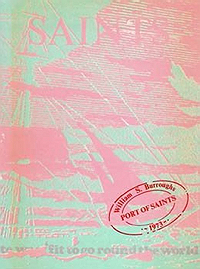 London: Covent Garden Press 1973, hardbound in a dust jacket and housed in a white slipcase. Issued in a series of 100 copies numbered and signed by Burroughs. Later editions by Blue Wind Press vary slightly in text and also lack the illustrations of the Covent Gardens production. This was Burroughs’ last work written in England before the return to America in the mid- seventies, and contains much material which was to lead to his first major work of the 1980s, Cities of the Red Night. Although dated 1973, the publication was not issued until 1975 due to labor and paper supply difficulties.

_____ limited trade edition, hardbound in a dust jacket consisting of 100 copies only, not signed/numbered or in slipcase.

Berkeley: Blue Wind Press 1980, one of 200 copies numbered and signed by Burroughs, hardbound with dust jacket in publisher’s slipcase. All copies of the signed limited edition were issued in dust jackets with the upper left-hand corner clipped off since the printed price was correct only for the hardbound trade edition and incorrect for the limited edition. They were clipped and the book sold at a higher price. 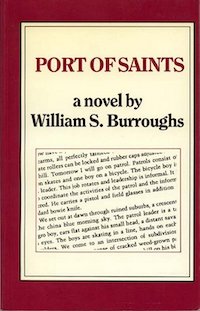