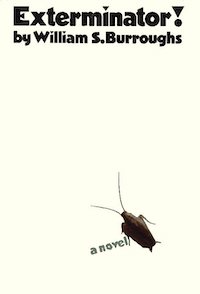 New York: Viking 1973, hardbound in dust jacket, one of 7,500 copies. From the collation it is noted “Portions of this volume have been previously published, in somewhat different form, in the following places: Antaeus, Atlantic Monthly, Cavalier, Daily Telegraph (London), Esquire, Evergreen Review, Mayfair, Rolling Stone, Village Voice.” M&M note that a copy bound in quarter leather with gilt-edged paper exists in the Burroughs Archive. Having examined this example personally, I note that laid into the copy is a printed note “Compliments of Viking Press.” Exterminator! being Burroughs’ first book for Viking, it is reasonable to assume that it is a one-off specially bound copy given to Burroughs by the publisher as a memento and not part of any series or special issue. Maynard & Miles A23a.