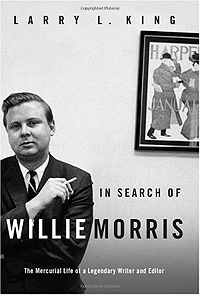 The new in New Journalism refers not only to the freshness of its techniques but also to the age of its practitioners. One of the youngest of the Young Turks was Willie Morris. In July 1967, at thirty-two, Morris became the youngest editor-in-chief in Harper’s 150 year history. Morris replaced John Fischer, who personally selected Morris to replace him. Phi Beta Kappa, a Rhodes scholar, outstanding senior at the University of Texas, star editor of the school paper and the Texas Observer, Morris was a prodigy, and Fischer introduced him to readers by excerpting Morris’ “North Toward Home” over the June and July issues of Harper’s and by writing an editor’s note announcing the changes at the magazine and Morris’ credentials.

In the September 1967 issue of Harper’s, the first issue completely under his control, Morris definitively made his mark by printing 45,000 words of William Styron’s controversial “The Confessions of Nat Turner.” In March 1968, Morris handed over the entire issue to Norman Mailer’s “The Steps of the Pentagon,” a mammoth 90,000 word article on Mailer’s experiences marching on the Pentagon in 1967. Repackaged as the book The Armies of the Night, the text formed the pinnacle of Mailer’s work in New Journalism and won him the Pulitzer Prize. In order to entice Mailer to write for Harper’s Morris secured Mailer a book deal before the article was even written. In March 1971, one of the last issues Morris edited, Harper’s ran Mailer’s “The Prisoner of Sex,” a bravado piece about the women’s liberation movement that was again published in book form. Mailer’s article would deeply disturb the magazine’s owners and financial backers and would bring to a head the conflict between the literary and financial aspects of Harper’s, which would result in Morris’ firing. This same conflict forced previous editor Fischer to leave Harper’s and to appoint Morris.

Morris’ tenure at Harper’s from 1967 to 1971 was one of the highpoints of New Journalism and the apex of Harper’s as a literary entity. Later work by William Gass and David Foster Wallace in Harper’s builds on the tradition Morris established. Yet Morris received only passing mention in Lewis Lapham’s An American Album: One Hundred and Fifty Years of Harper’s. Lapham replaced Morris as editor-in-chief in 1971 soon after “The Prisoner of Sex” issue as he was the only man left standing at Harper’s. The rest of the editorial staff walked out in protest over Morris’ ouster. Morris generated fierce loyalties and great controversy. 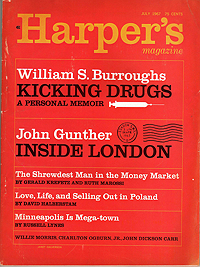 In the first issue with Morris as editor-in-chief on the masthead, William Burroughs contributes an article: “Kicking Drugs: A Personal Memoir.” It is unclear to me whether the Burroughs article and the entire issue were a carry-over from Fischer’s work as editor-in-chief. In any case, Burroughs’ name is prominently displayed on the cover, the headliner, and it is Burroughs’ name that sells the magazine. In looking over Burroughs’ article and the contents of the rest of the magazine, I get the sense that this issue of Harper’s has more the stamp of Fischer than of Morris.

For example the cover design is rather flat and Burroughs’ contribution is a standard Burroughs submission. Burroughs’ two stocks in trade were kicking drugs and words of advice to young writers. In 1965, Burroughs suggested these same storylines to Playboy, whose editors turned them down and urged Burroughs on to a new topic. Burroughs wrote a piece on his return to St. Louis in full cut-up mode, which Playboy then rejected as too far from their standard fare. Burroughs could not win. In some ways, Burroughs’ writing on kicking drugs was a con since he never completely kicked. It is another case of Burroughs playing the marks and giving the public what it wanted and expected.

Yet Burroughs’ memoir would in some ways be indicative of Morris’ editorial vision. Morris’ liberal outlook embraced outside-the-box views on race, gender, and addiction. Burroughs’ article provided a fresh perspective on a controversial topic. Burroughs’ championing of apomorphine and his conspiracy theory of government suppression of a drug cure and manipulation of drug enforcement were explosive stuff. At the end of Burroughs’ article, a doctor was given space to print another side of the story and the editors of Harper’s weighed in as well with an editor’s statement on Burroughs’ views. In fact in November of 1968, Morris would address Burroughs’ article again in his editor’s column, criticizing Burroughs’ stance on methadone and noting the success of the methadone program. Interestingly, it would be methadone that would bring some peace to Burroughs in the last decades of his life in Lawrence.

Addiction was a topic that cut close to the bone for Morris. His experience with booze, like many of the New York journalists (see Pete Hamill’s A Drinking Life), was self-destructive. By the 1960s, the shift from booze to drugs was in full force at Harper’s and would prove to be divisive among the editorial staff. For Morris another drug of choice was valium which, coupled with alcohol, is a dangerous mix. In a typical day at Harper’s, Morris would roll in at noon and leave in the early afternoon for a day of drinking. He must have viewed Burroughs’ experience with apomorphine with interest. Dr. Dent began by treating alcoholics not drug addicts.

Morris was also intoxicated by language and had a weak spot for a beautiful turn of phrase. To my taste, Burroughs, particularly in the more poetic passages of Naked Lunch and even in the cut-up trilogy, has a wonderful way with language, but conversely the cut-up, Burroughs’ primary mode in the 1960s, attempted to break down the controlling nature of words, to dissect the sentence, to provide the antidote to addictive language. Maybe that is one reason why Harper’s printed a straight piece of journalism from Burroughs. I suspect the cut-ups would not appeal to Morris.

So Burroughs is and is not an odd choice for Morris’ first issue as editor-in-chief of Harper’s. It speaks to Burroughs’ reputation and celebrity at the time. A Burroughs piece drew attention and got people talking. Morris above all viewed a well-edited magazine as a vehicle to generate conversation (at the water cooler or more likely the bar) and to stir up controversy. He had a daring editorial style not only in subject matter and point of view, but also in the length and depth of the articles he published. The idea of dedicating 50,000+ words to a single author is unthinkable in today’s magazines where a 3000 word piece is considered a substantive cover story. A writer such as Styron or Mailer (or Talese or Halberstam) was more to Morris’ taste, but, in the mid- to late-1960s, Burroughs was everywhere and the chance to publish him could not be passed up easily. The July 1967 issue was a small but important first step for Morris on a journey that would take Harper’s and New Journalism to a height they had never been and, arguably, to which they would never return.