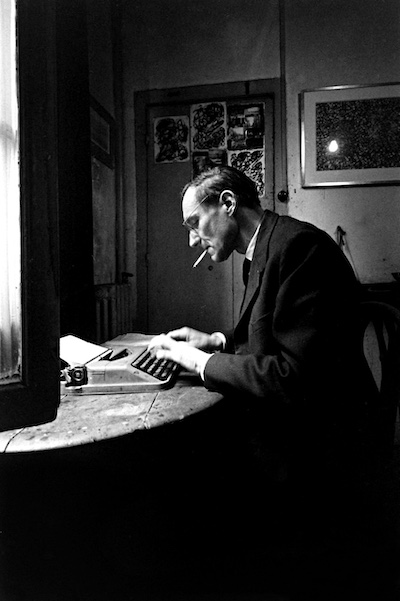 In the Paris Review Art of Fiction interview from 1965, Burroughs states, “I don’t make myself work. It’s just the thing I want to do. To be completely alone in a room, to know that there’ll be no interruptions and I’ve got eight hours, it’s just exactly want I want — yeah, just paradise.” Writing as all-consuming passion. The pursuit of the work replaces the pursuit of human contact. Writing is not a job, a profession, but instead one’s purpose, one’s reason for living. Writing is also oblivion, beyond pain and pleasure, a pure state. Paradise. I like to think of Burroughs of the Mimeo years from 1959-1965 in the same terms as writers like Mallarmé, Kafka, and Rilke. And Beckett. Burroughs’ idol. Writers of pure solitude and absolute purpose, but this portrait is somewhat impressionistic, as the mid-1960s also revealed Burroughs at his most social and communal. Yet the image of Burroughs as priest/monk of a pure literature persists for me and remains a strong source of his appeal.

To be true to his passion, Burroughs realized he must abandon it. In the same interview Burroughs states, silence is the “most desirable state.” The logical progression after the cut-up was to stop writing. To retreat into silence like Prospero, Rimbaud, or Duchamp. To turn his back on that which he loves in order to remain true to his art and its ramifications. Yet Burroughs hesitates at the abyss (as did Duchamp). He continues, “In one sense a special use of words and pictures can conduce silence.” Burroughs lacked the courage of his convictions and would continue to write until the end. Addicted to writing, Burroughs would not stop and as he continued to write he prostituted his passion, and as he grew increasingly famous, he domesticated his paradise. 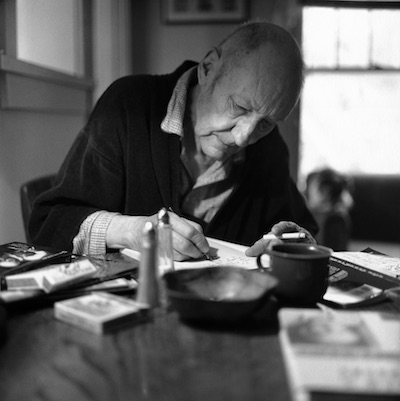 Written by Jed Birmingham and published by RealityStudio on 1 June 2019.