#7: St. Valentine’s Day Reading Program (1965). An Installment in Jed Birmingham’s series of the The Top 23 Most Interesting Burroughs Collectibles. 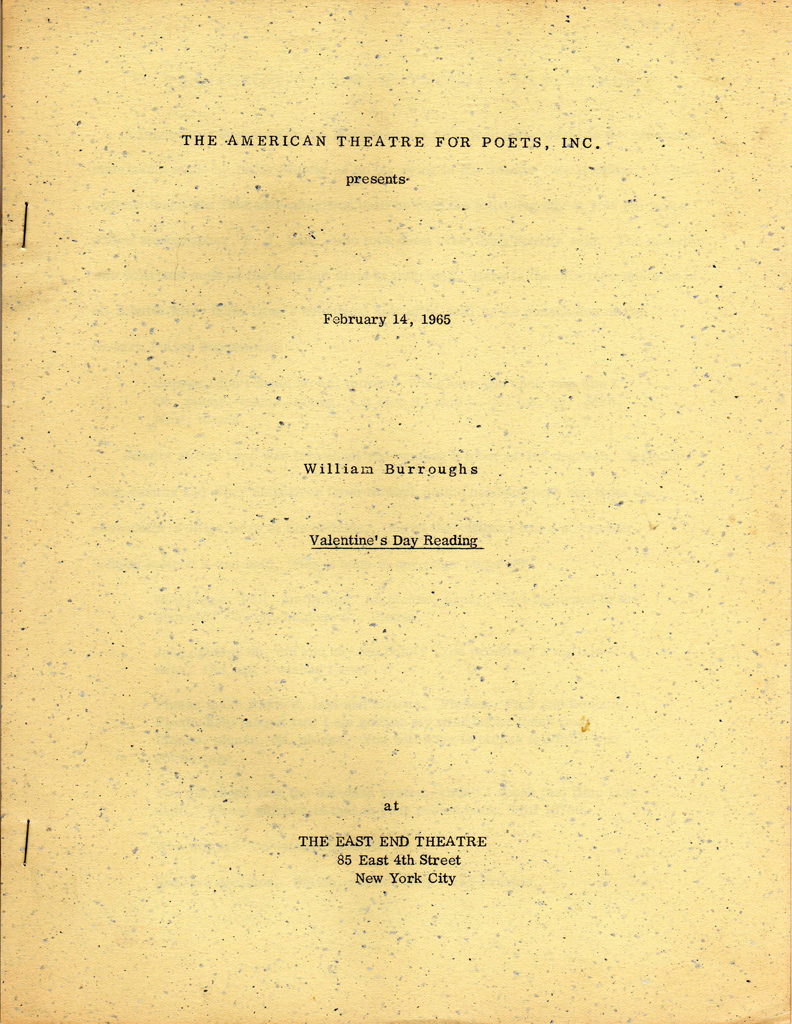 Hey, did you see the Granary Books archive of poetry flyers from the Mimeo Revolution? Around 400 flyers and handbills announcing a vast assortment of events and readings from 1960 to 1980. New York School, Language, Beat, Deep Image. You name it; this archive has it. This is the public face of the Secret Location. I immediately focused on Fuck You flyers and there are a few. Not as many as I would have thought, but the Ed Sanders archive has all of those, also available from Granary Books. Of course, Burroughs is in the mix in the flyer archive. Most notably, material related to the 1978 Nova Convention. For many this event is considered Burroughs’ most important public appearance. Others might throw out there his reading from 1981 on Saturday Night Live.

I do not agree. You have to go back to February 14, 1965, to his St. Valentine’s Day Reading at the American Theatre of Poets located at the East End Theatre on 85 East 4th Street sponsored and hosted by Panna Grady, a socialite who collected poets, such as John Wieners and Charles Olson. She attempted without success to acquire Burroughs but he played hard to get. Burroughs a true stopper. The public Burroughs, the popular Burroughs, the Burroughs of Nike and Drugstore Cowboy, begins here. It is hard to get your head around the fever pitch of anticipation that surrounded Burroughs’ return to the United States in 1965. Interestingly in similar circles in New York City, this paralleled the anticipation for John Ashbery’s return from Europe, and both Burroughs and Ashbery immediately immersed themselves in the NYC underground. Berrigan admired both men but I know he was at the docks awaiting Burroughs’ ship when it came in. Was Ashbery similarly greeted? 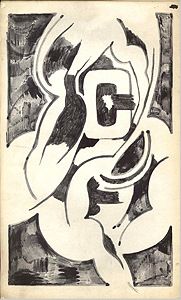 Up until that point, Burroughs was a legendary figure who was read, or, maybe more accurately, read about, since much of his work was inaccessible and in limited distribution. In any case, Burroughs was never encountered in the wilds of America. As a result, he took on the mystique of a mythical creature like a dragon or a griffin. For a brief period before the height of his influence, it was possible to rub shoulders with him in the Lower East Side in very intimate settings. The St. Valentine’s Day Reading was one of those occasions. Of course next to nobody actually experienced the reading in person. Or maybe I should say that only those who were somebody did. Since the theater only held 129 people, I would suspect that every one of those attending was an insider and already in the know. I have no proof but it seems to me the reading was highly anticipated. The day of the reading Ted Berrigan put out an issue of C Magazine that featured Burroughs’ work. Word had gotten around that Burroughs was in the building. I wonder if there were any walk-up sales; what would a guy off the street have thought of the proceedings.

For me the St. Valentine’s Day Reading is the Burroughsian equivalent of the monumental John Cage concoction (other cooks in the room were Robert Rauschenberg, Charles Olson, and MC Richards; Artaud provided the recipe) Theater Piece No. 1, which came hot out of the oven of Black Mountain College in 1952. Although Burroughs toned things down a bit at the East End, he was no doubt experimenting with the Happening as a form in his readings. Earlier, more raucous, events, like one with Gysin at ICA in London, provide better evidence that Burroughs was aware of not only Cage but Kaprow, Dine and Oldenberg. As with Time, the experimental Burroughs was always on the make: “I have given one performance with reading. Boujeloud music and a tape at a theatre here which is run by friends and provided with excellent equipment. What I want to add is an image track of slides and flashes of moving film. We have cameras etcetera at our disposal. We could also use the dream machine in these performances which would expedite its use on a commercial scale” (Letter to Sommerville, February 16, 1965). Maybe a comparison with Andy Warhol’s The Plastic Exploding Inevitable is even more apt. 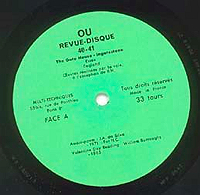 Interestingly almost no primary evidence survives from the birth of the Happening at Black Mountain. There are no photographs or recordings, and all accounts by the participants differ wildly. What the hell happened at the first Happening? With Burroughs, we are not quite so clueless. Given the reading’s now legendary status (mythic, really), one might wonder if the reading actually happened were it not for the scant documentary material that proves that it gloriously did. Let’s examine the evidence from the scene of the crime. There is the befuddled New York Times review of the reading by reporter Harry Gilroy, which makes the reading sound just like a Pop art Happening: “The gangster’s last words, full of phrases like ‘Don’t let Satan draw you too fast,’ interspersed with lines taken from recent news articles about Vietnam and two air crashes, generated a mix of shock and nervous laughter. ” Krea Kritiek published the Dutch Schultz transcript in May 1965, which Intrepid reprinted in 1969 in the famous Burroughs issue. There is a recording of about 10 minutes that was issued by Henri Chopin as OU 40-41 on disk in March 1972, and later reissued in OU 42-43-44. But for me, the most important and interesting document was the mimeographed program distributed at the reading. The seven-page program includes the Dutch Schultz transcript and “The Coldspring News.”

The prospectus for the Granary archive gets to the heart of the matter in relating the archive’s importance. Like the flyers, the readings are transitory in nature. They threaten to disappear the minute they happen. And given faults of memory, everybody who did attend probably remembers the event differently. It is something similar to what is going on in Kurosawa’s Rashomon. Poetry handbills and flyers are essential documents because they are historical source material. They are primary, not secondary, and, in many cases, the only evidence that a literary event occurred. They help prove that a Happening happened.

This is also a primary aspect of collecting and a major element of its appeal. To build an archive is to accumulate evidence and testimony, a basis of fact upon which a historical account can be based. As Steve Clay makes clear, these pieces of ephemera form the factual foundation for scholarly research. They provide the dates and addresses for pivotal moments as well as the daily calendar of a literary scene. Handbills and flyers are the historical record. They cannot be denied. They have to be addressed and dealt with. Hopefully, some scholar will do so with the Granary collection. 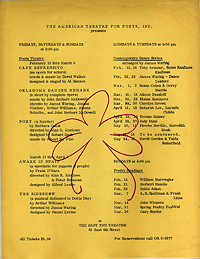 Flyers and programs also provide the touchstone from which more creative aspects of academic analysis can take flight. For example, the silver flecks on the St. Valentine’s Day program suggest Warhol’s Factory. At the time, this was very much the scene in which Burroughs was circling. He attended all the right parties and openings. In addition, ephemera suggests those homes and estates that remain completely unaltered over the years, the domestic space as museum that freezes in amber the everyday objects of a bygone era. They capture a moment in time. They appeal to the senses. Smells, sights, flavors. It is not all about dates. Ambiance means even more in my opinion. Minimal as it is, the St. Valentine’s Day program definitely has such appeal. It is important as an object in itself.

Finally, such items provide, for those cursed by birth, a ticket to the original experience. It is impossible for most to attend the events of the past, even if they were alive to do so, but to hold a handbill or flyer, to have one in one’s possession, is to be transported back in time to the actual event. To own the item is to own a stake in the moment. As a collector possessing these magical items, it is as if you were actually there, like you were handed the handbill as you wandered down Bleecker Street or as you were settling in your seat at the reading. Is it as good as actually being there? No, it is not, but it is the best I have.

The St. Valentine’s Day Reading program not only documents Burroughs’ most important and mysterious reading but also provides access to a special place and time. A creative utopia. The off-off Broadway scene of the Lower East Side in 1965. Folk music, poetry readings, avant-garde theatre and dance, underground film mingled together in an atmosphere of unbridled energy and a sense of possibility that may never be duplicated. Burroughs was going through a rite of passage that mimicked that of an entire artistic generation. He was about to pass through the threshold from innocence to experience. What followed for Burroughs was less an exploration of creative boundaries than exploitation of covered ground. This is true of the counterculture generally. The St. Valentine’s Day Reading is an amazing live performance by a rock star about to explode. Think Bruce Springsteen as experienced by the eyes and ears of Dave Marsh. Burroughs was experiencing and experimenting with the excitement of performing before a live audience right before his work would explode on the charts. Naked Lunch was still locked in an obscenity trial; Nova Express had just been released. The U.S. audience was just getting its first glimpse of Burroughs in the flesh. The East End was a private show before the inevitable and soulless stadium concerts. Burroughs was an underground sensation. Just read the New York Times review. His performance was performance art and he blew the minds of his audience of insiders. They did not know what to expect or, if they had high expectations, Burroughs exceeded them all. Thereafter, be it at the Nova Convention or on Saturday Night Live, his readings were meant for a larger audience consisting of lip synching, pandering to expectation, publicity tours, photo ops and book signings. All for a paycheck. And, of course, let’s never forget that even on St. Valentine’s Day when all should be done for love and passion, Burroughs was all about getting paid.

The St. Valentine’s Day program is a postcard from a brief, shining moment in Burroughs’ career. It is like catching not Springsteen but the Ramones at CBGB before they headlined bigger and better-produced shows in London and beyond. The program states: “Wish you were here!” Burroughs collecting is all about such wishful thinking.

Written by Jed Birmingham and published by RealityStudio on 28 February 2016.
Readings William Burroughs