#12 Roosevelt After Inauguration (Fuck You Press 1964). An Installment in Jed Birmingham’s series of the The Top 23 Most Interesting Burroughs Collectibles. 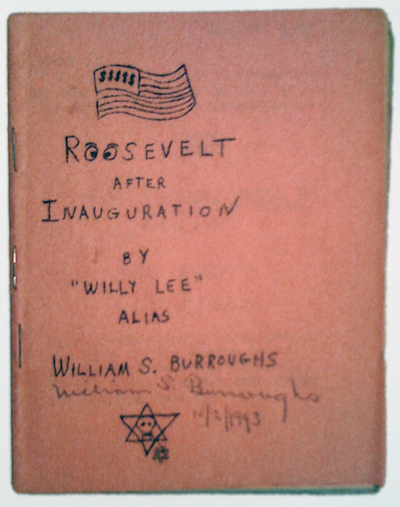 As a Burroughs collector, I am envious of those who collect Bukowski. Back when I was working at Second Story Books, a beautiful copy of the Loujon Press It Catches My Heart in Its Hands came into the shop. The minute I saw it I felt jealousy rushing over me, like a shot of rotgut burning down my throat. Here is a fine press effort from one of the giants of the Mimeo Revolution. Jon Edgar Webb’s Loujon Press was and is famous for its over-the-top publications and for the arduous and meticulous manual labor that went into producing them. Facts which Webb made sure his patrons and readers were well aware of. It Catches features a beautifully illustrated cork cover, colored paper with deckled edges, and exquisite letterpress work. As a bonus each copy was signed by Bukowski in silver ink. This is persistence, dedication, and obsession in publishing. It also does not hurt that these poems represent some of the finest Bukowski ever wrote. Why is there nothing like this in the Burroughs bibliography? You can see where my envy comes from. 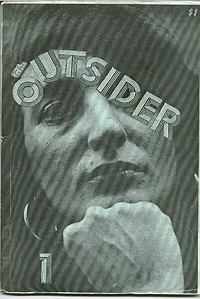 Sure, Burroughs was in The Outsider, which make no mistake is a beautifully constructed mag, but It Catches, along with Crucifix in a Deathhand, are on another level. Few people know that Burroughs almost got there himself. The first issue of The Outsider included an excerpt from The Soft Machine. In conjunction with his submission for issue one, Burroughs also sent Webb a packet of cut-up material from himself and other authors experimenting with the technique, namely Sinclair Beiles and Harold Norse. There was correspondence back and forth about a cut-up issue of the magazine, which never occurred although Burroughs appeared in later issues. Again we come to What Ifs? What if Webb published a cut-up anthology with all the pomp and circumstance of Bukowski’s It Catches or Crucifix? Such an effort would put later fine press publications involving Burroughs, like The Cat Inside, to shame.

Of course, that What If never was, but at Second Story Books, It Catches was within my grasp and I reached deep into my wallet in order to grab it. Even with a substantial discount, the book was about the same as one of my paychecks if not part of a second. My marriage was falling apart at the time and there was a mortgage to pay, but I could not resist getting in on the Bukowski action. There are a lot of proverbial camels, straws and backs around this period and it is difficult if not impossible to focus on just one but hanging out with Buk did not help things. Bros not hos will not get you anywhere. For some perspective, this was also a time in which I was forced to put my run of Fuck You, a magazine of the arts up on ebay to make some quick cash. This was the equivalent of selling an internal organ. I sabotaged it by pricing the set rather high and luckily nobody bid on it. A few weeks after the posting, I received an anonymous email expressing how happy he/she was for my sake that the magazine went unclaimed. My financial prospects were somewhat dire and buying Buk threatened to put me, not on skid row, but in default on my mortgage. In buying It Catches, I literally did not get paid, which was not an uncommon situation at the time. I spent more on books than I earned in selling them. Everything went back into the coffers of Second Story Books. Completely irresponsible, I know, but Bukowski’s bibliography from the 1960s will do that to you. It encourages you to make bad decisions. Looking at It Catches now and reading the poems in that context, I can honestly say I have few regrets. 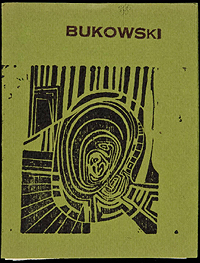 If you are a collector of the Mimeo Revolution like I am, please forget about focusing on the A items and the C items. It is all about the B-list: Burroughs, Bukowski, Berrigan, Blazek and Brainard. That is everything you need to know and everyone you need to buy. Out of that list Bukowski stands out until Black Sparrow took over his bibliography. I have stated my case on that matter in the Bunker and it does not need repeating in detail here, but for me all those mimeo and little mags before John Martin took over the show are so seductive. The book that stands out is The Genius of the Crowd published by 7 Flowers Press in 1966 on a letterpress by d.a. levy and Jim Lowell of Asphodel Bookshop, with prints by Paula Marie Savarino, in small run of 103 copies. It is crude to say the least and some of the pages are actually trimmed envelopes. A form of mail art perhaps. This type of DIY publishing is as fine an example of printing as anything Arion Press churns out. It is quite simply sublime. In the raid on Lowell’s bookshop, many of the copies were seized for obscenity and it is thought that around 40 copies have survived, many of those in institutional holdings. It has become a true stopper for Bukowski collectors. In Al Fogel’s list of Bukowski rarities, The Genius may well stand along as the Holy Grail. Ken Lopez recently had a dampstained copy for $8500.

Despite my love for Jeff Nuttall, I have to grudgingly admit that levy, a suicide at age 24, was the greatest mimeographer of all-time. He was not a draftsman, but an experimental artist, a master of the medium, much like Johnny Thunders is the god of punk guitar. Sloppy, uneven, a manipulation of slurs and blurs, levy’s Scarab Poems and “AGAIn? Yur primer cord is showing” with its blobs, its acknowledgement of the physical nature of ink, its superimpositions, and its fading are as radical as the artwork of the Abstract Expressionists. Karl Young argues levy’s case best:

Taking a cue from blurs and set-off, levy began overprinting texts, sometimes for visual effects alone, sometimes as a technique to obscure some words while leaving others visible, creating a new text out of an old. A number of other mimeographers had reversed stencils, printing texts backwards. This was invariably done to produce results that were merely cute. levy worked reversed stencils in conjunction with other print runs to produce meaningful interactions of directions. His most resourceful use of mimeography came from over-inking stencils. Slight overinks were one of the perennial annoyances for veteran mimeographers. In a number of late works levy achieved a surprising range of text alteration and abstract graphics through various degrees of over-inking and cylinder impression. The initial results of these prints were often single sheets which he then had reprinted offset so as not to disturb the imbalance he had set up. In this process, he had completely jumped over the standard limitations of mimeo, turning it from one of the most tediously restricted forms of letter reproduction into the tool for one of the most dramatic forms of visual poetry of the era.

Another What If — a dream work for me, and one that would have have been at the top of my list of Burroughs collectibles — would have been a combination of levy’s most experimental mimeography and Burroughs’ most radical cut-ups with juxtapositions of text and image, as distributed by levy and Lowell. As I wrote about on the Bunker, Burroughs was on levy’s radar, but it was not mutual. Burroughs mingled in more established circles within the anti-establishment. 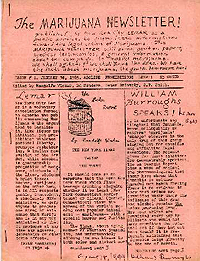 The most levy-ish publication, think Marrahwannah Quarterly, of Burroughs’ bibliography is the Fuck You Roosevelt After Inauguration. Although printed mimeo not letterpress, it has the look and feel of The Genius of the Crowd. Or more accurately, it is the closest Burroughs ever got to being published in such a manner. If levy was the greatest mimeographer, Ed Sanders ranks as one of the finest, most successful, and most influential mimeo publishers. I am less impressed with his glyph work than his ideal merging of context and content in his publications. Sanders was as much a revolutionary printer as Benjamin Franklin. In Sanders’ hands, the mimeograph serves as a weapon in the total assault on the culture along with underground bookshops, rock music, marijuana, fucking in the streets, and experimental film. All of which Sanders had his hand in. The Marijuana Newsletter deserves a mention here and could easily have made my list as it combines the best elements of Fuck You Press with Burroughs’ interest and involvement in alternative news outlets. I could be argued that by picking Roosevelt instead, I went with the more traditional and easy choice. Yet there is a lot going on in that seemingly simple publication; as I wrote on the Bunker, Roosevelt was a fuck you to mainstream publishing, City Lights, and the United States government.

I received my copy of Roosevelt as a Christmas gift from my mother years ago. She had no idea what it was and bought it on James Musser’s (Skyline Books) suggestion. When I opened it on a bright sunny day in Florida, my mother was horrified. She held it between her fingers like a used condom (which reminds me of levy’s Cleveland Prints, one of his highspots). “I paid for this? What the hell is this; this is what you wanted?” Oh, hell yeah! And I still do. In the realm of mimeo, where the down and dirty is heavenly, this is as angelic a publication as you are going to find. I find it quite simply beautiful and beautifully simple. “Glories stream from the underground below/Heavenly hosts sing Hallelujah.”