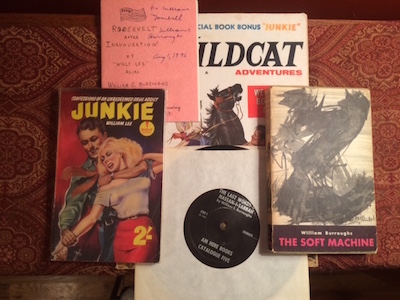 “Sometimes paranoia’s just having all the facts.” Early on as a kid, I was well on my way to becoming an obsessive Factualist. I spent hours edifying my mind on encyclopedias, trivia books, histories, almanacs, and timelines. I would read anything chock full of factoids. The bible, the Naked Lunch of facts, was the three volumes of The Book of Lists compiled by David Wallenchinsky, Irving Wallace and Amy Wallace from 1977 to 1983. I read those books to shreds as well as their companion volume The People’s Almanac. Famous people who died in the bathtub. Famous people who died laughing. Famous people who died while having sex. Famous people who died laughing while having sex in the bathtub. Lots of weird facts about death. People suspected of being Jack the Ripper. Famous unsolved murders. Jay Robert Nash’s Bloodletters and Badmen, an encyclopedia of crime, was another favorite. From the age of nine to seventeen, I checked that book out of the library so many times that I had to have made an FBI list at some point. Maybe when I checked out Bloodletters and Catcher in the Rye at the same time.

I loved nothing more than reading lists. I still do. As I grew older, I found myself less drawn to lists of historical facts and trivia than lists of taste and opinion. The top ten westerns movies of all time (The Wild Bunch). The top ten films of the 1970s (Apocalypse Now). The greatest songs of the 1960s (The Rolling Stones “Gimme Shelter,” The Stooges “1969,” The Velvet Underground’s “Heroin,” The MC5’s “Kick Out the Jams”). The greatest punk rock songs of the 1970s (The Dead Boys “Ain’t It Fun,” which I prefer to the Rocket to the Tombs version). The greatest horror movie of all-time (John Carpenter’s The Thing).

I can and do spend hours going through lists like this. Recently with the help of YouTube I started going through Pitchfork’s list of the Top 200 Songs of the 1980s. This is the decade of my formative years and should be right in my wheelhouse; this should be the soundtrack to my youth, so I was almost giddy to see tons of songs that I had never heard of before. Number One: Prince’s “Purple Rain.” Sure I knew that one. I was also happy to see Tangerine Dream’s “Love on a Real Train” at Number 154. The Breakfast Club is great. So is Sixteen Candles and Say Anything, but Risky Business is the greatest teen movie of the 1980s in large part because of the scene in the Chicago subway impeccably scored by Phil Collins’ “In the Air Tonight” (Number 130 on Pitchfork) and Tangerine Dream. How many scenes from 1980s classics have not one but two classic songs? Not even Phoebe Cates’ breakout performance in Fast Times at Ridgemont High. But even better than the songs I knew and remembered fondly were songs I never heard before like Wipers “Youth of America.” Listening to that ten minute opus at 1am while working through a twelve pack of Natty Boh was mind-blowing. That is the magic of a great list. It introduces you to a new experience that suddenly finds it taking a spot on your own personal Mount Rushmore.

In that spirit, over the next several weeks I am going to work through the top 23 Burroughs collectibles. Let me stress this is no list of facts. It is purely one of taste and opinion. Years ago, Al Fogel put together a famous list of the top 20 Bukowski rarities. Quoting the Stones “Midnight Rambler,” another great song from the 1960s, this list is “not one of those.” This is not a list of the most expensive or the rarest Burroughs items although such items are definitely on this list. Also this is not a list of one-of-a-kind items like the Grove Naked Lunch signed by Burroughs to Bowles or a selection of key manuscripts and letters. No, this is a list like the Burgess 99 or the Roth 101. This list is less like the Modern Library’s Top 100 Novels of the 20th Century and more like Larry McCaffery’s more quirky list in response. It is the best of the best from Burroughs’ bibliography and a list that reflects one individual collector’s conception of what matters in Burroughs’ overwhelming and varied output as well as a statement of what matters in collecting in general.

I guess if pressed I would say that this list is The Top 23 Most Interesting Burroughs Collectibles, although I know that the word “interesting” is a vague and charged term. So often something is revered because it is “interesting” or dismissed because it is “not interesting” while not providing details to fill out what that means. By “interesting: I take the word in all its facets. It could be that the Burroughs item excites my fascination or curiosity. Or that it was of advantage or benefit to a person or a group, be that Burroughs himself, me as a collector, or to punk rockers or new fictioneers. It could be that the item had a stake or involvement in an undertaking, like Fluxus, Pop Art, the Mimeo Revolution or the counterculture. Or it could be simply about money in that the book will increase or has increased in value with considerable interest. Or that it is a great bang for the buck.

Another great thing about lists is that they inspire conversation in bars. I remember sitting in Rocklands near Ballston having a beer one Saturday afternoon and talking to the guy next to me about the greatest novels of the post-WWII era. Gravity’s Rainbow, Invisible Man, Life A User’s Manual, The Recognitions, Midnight’s Children, On the Road, Catcher in the Rye, Infinite Jest? Take your pick. These are some common contenders. You no doubt have your own favorites. I surely have mine. This guy made an impassioned plea for Pat Conroy’s The Prince of Tides. Excuse me, the football game is really loud in here? I think you said The Prince of Tides. I ordered another beer in an effort to get my head around his arguments. I had not read the book so I could not dismiss his plea out of hand, so I thanked him for the beer and walked across the street to the public library and checked out Conroy’s alleged masterpiece. I then crossed the street again over to my apartment and proceeded to lay out on the couch preparing myself for fireworks. But for the next day and a half there was no screaming across the sky. For the next few weeks I kept an eye out for the guy so we could resume our conversation, but I never saw him again. I cannot remember his face or even The Prince of Tides for that matter but I distinctly remember the energy of that barroom conversation. It inspired me to try a new reading experience and even if it was not to my liking it was something different and something I had not thought of. That is the true meaning of interesting. Send in your lists, maybe we can have a beer and hash them over.

I will be posting an essay a week on these items. Watch here for further developments.

11 thoughts on “The Top 23 Most Interesting Burroughs Collectibles”