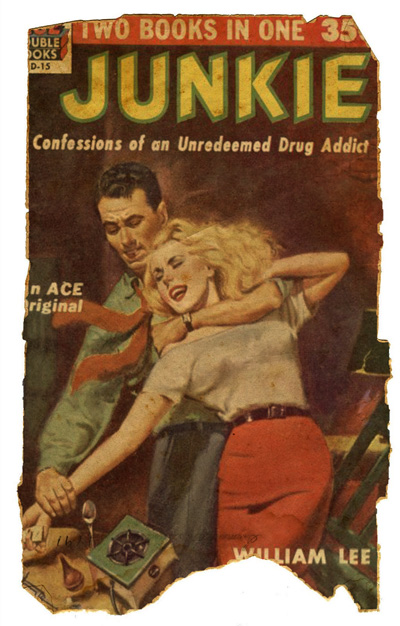 Published tête-bêche with Narcotic Agent by Maurice Helbrant. Ownership signature of Bill Garver in pencil on ffep with annotations through in light pencil. The book contains multiple stains of unknown origin. Junkie is detached from Narcotic Agent as are isolated pages throughout both texts. All pages present. Location: unmarked locker in the North Bus Station in Mexico City.

Writing (and thus marginalia) is about leaving a trace, a mark, an impression. That is something countless junkies never do. Junk threatens to render one faceless, a mere statistic. Junk makes one invisible. What set Burroughs apart is that he was more writer than junkie. Graphomania took precedence over the addiction to heroin. To a much lesser extent the same holds true for Herbert Huncke. The same cannot be said for Phil White or Bill Garver. That is what makes the existence of Garver’s annotated copy of Junkie special. Garver’s marginalia records the impressions of one truly on the margins and fringes of respectable society.

His urge to notate may harken back to his school days in Philadelphia, growing up in the reputable household of his banker father. From childhood, Garver had an interest in history; he claimed to have read H.G. Well’s Outline of History over 100 times. Possibly that accounts for Garver’s impulse to mark up his copy of Junkie, the most vivid and accurate history of junkie life during the war years. Garver’s marginalia is likewise history. As Kaspar Gutman said in The Maltese Falcon, “These are facts, historical facts, not schoolbook history, not Mr. Wells’ history, but history nevertheless.”

Marginalia also records immediate impressions and are arguably a more real and honest accounting than the material it attaches itself too. They may also be more emotionally charged, which contrasts with the deadpan nature of Junkie. Garver’s notations are in light pencil: erasable, temporary. Tentative comments reflecting his tenuous hold on future readers’ memories and his shifty, shifting place in recorded history. The condition of the book suggests the difficult nature of Garver’s day-to-day existence and mirrors his physical and emotional condition. If not for Kerouac, Huncke and Burroughs, Garver would be a lost figure. A placeless ghost. As it is, Garver died in Mexico City in 1957, a permanent exile, buried in the same cemetery as Joan Vollmer.

Yet Garver lives on in Beat biography and memoir, as Bill Gains in Junkie, and in other novels by Kerouac. It must have been sobering for Garver to confront himself in print. As portrayed by Burroughs, Gains is a controversial and charged figure, an addict who delights in recruiting others into the drug life. He appears throughout the novel and is one of the few rounded characters to appear therein. Garver’s notes show him bristling at some of the negative elements of his portrayal and correcting what he saw as errors of fact or interpretation, but emphatically agreeing with Burroughs’ assessment that junk is a way of life. For example, Garver has double underlined the entire final paragraph of the preface on page 10 and further placed an asterisk beside this passage, thus indicating his belief that Burroughs hit a vein of truth. Interestingly, Garver also took the time to annotate the entire Narcotic Agent, and his marginalia throughout that text is not in the manner of a conversation, although contentious, as in Junkie, but an extended argument (shading into testimony and deposition) with Helbrant.

Written by Jed Birmingham and published by RealityStudio on 31 October 2012.
Junkie