An Installment in Jed Birmingham’s series on the The Greatest Burroughs Collectors. #1 is el hombre invisible himself, William S. Burroughs.

What follows is a restored text of sorts. Like Burroughs and Oliver Harris and their Soft Machines, here I am editing texts on Burroughs that I have previously published on RealityStudio. Like Burroughs and Harris, I am recontexualizing. Great writers and scholars, like great collectors, are not mere aggregators. 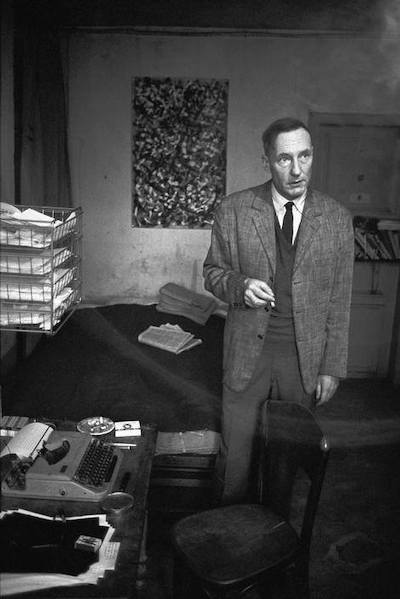 It is my belief that professional authors must collect themselves. It is part of the job description. If you are an author who performs for an audience and expects that audience to pay for the privilege of reading your performance, then you have the obligation in return to let that audience at some point go through the receipts in order to understand your process and legacy. I cannot forgive a writer like Ted Berrigan who burned his early writings before the development of his mature work and style. It is also hard for me to forgive even a writer who barely published in his lifetime, like Kafka, who asked that his manuscripts and letters be burned after his death.

Libricide is a sin against the muse for any writer, but if you are an author like Burroughs, who aspired to sell out and eventually accepted a six-book deal with Viking or an endorsement deal from Nike, it is especially unpardonable. A professional athlete or actor is not paid high sums of money for playing a game or a role; they are instead compensated for the loss of their anonymity and privacy. In my opinion, they are being paid too little. They have made a devil’s bargain; yet they must live with the consequences. The same holds true for the professional author.

Burroughs fulfilled his basic obligation, in spite of himself. I am thinking of the mass of cut-up related material in his archives of which the general public and scholars alike have barely scratched the surface. Throw in his scrapbooks, letters, and more “traditional” manuscripts and there is plenty to keep people busy for quite some time. One must give credit to the core Beats; they may have given off an air of antiintellectualism, but they understood the crucial importance of collecting and archiving in creating an artistic legacy. Gregory Corso is an exception or rather he knew the value of collecting too well. Rascal that he was, he played the con with the booksellers and collectors. The booksellers were in on the con as well. I won’t name names. Manuscripts and association copies made to order, stolen books, and all manner of dubious practices were common for Corso. He often stole books from Ginsberg and sold them to booksellers as from Ginsberg’s library. Berrigan was also infamous for playing these games. Maybe Corso and Berrigan are the true working-class heroes, like Johnny Paycheck, they are not afraid to say “Take this job and shove it!” when it comes to the mundane obligations of the writing profession.

Kerouac and Ginsberg were the first great Burroughs collectors. Kerouac collected stories of Burroughs for his novels, serving a role like Boswell did for Johnson; Ginsberg collected Burroughs’ letters, which, as Oliver Harris has demonstrated in The Secret of Fascination and elsewhere, were the initial manuscripts for Naked Lunch. Kerouac and Ginsberg understood that Burroughs was a great writer worthy of collection before anybody else. Burroughs did not always return the favor. For whatever reason, Burroughs did not collect for posterity Ginsberg’s letters during that crucial period of the genesis of Naked Lunch. The loss is immeasurable. 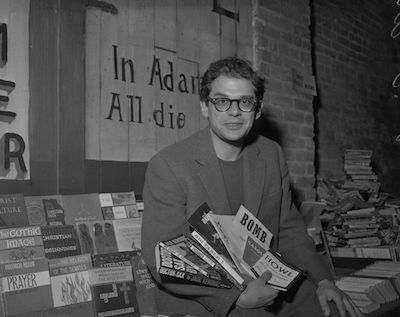 Ginsberg was an organizational genius when it came to the mundane, routine, and bureaucratic tasks that come with being a writer. Ginsberg collected himself meticulously, but I like to think that some of Ginsberg’s attention to the logistical details, like maintaining an archive, rubbed off on Burroughs as well. It did kind of. As Miles writes, “Until rare book dealers began sniffing around and Ginsberg informed him that he had sold some of Kerouac’s letters, Bill had thrown away all of his correspondence as soon as he had read it (as did his mother).” In fact according to Miles, “[t]he idea of Burroughs as archivist is, unfortunately, a bad joke.” The idea of Burroughs as a collector is one of my Big Lies. As it goes in John Ford’s The Man Who Shot Liberty Valance, when the legend becomes fact, print the legend. This is what Burroughs would have done. Just think the Introduction to Queer. Miles is concerned with facts and I am looking for the higher truths.

I may just have to face the facts, again with those annoying facts, that Brion Gysin was the great Burroughs collector. Miles says as much:

The fact there is an archive at all is thanks to Brion Gysin: Burroughs was prone to up and leave on a whim, leaving behind everything that did not fit into his suitcase with friends in a series of boxes and suitcases stored between London, Paris and Tangier. At the Beat Hotel, Gysin would carefully pack everything away in his sea trunk when Bill did his disappearing act, but in London, where Burroughs had more than a dozen different hotel rooms between 1960 and 1964, much material went missing because Ian Sommerville wasn’t always there to rescue it when Bill shot off to Tangier or back to Paris. (Thus the legendary Hardiment suitcase, which one can assume was but one of many).

Suitcases always seemed to go missing. Not libricide exactly, but death by neglect. According to Miles, Gysin said, “that in his estimation, about half of Bill’s manuscripts were missing, presumed destroyed, and so we cannot get a balanced view of his work just by looking at what has been preserved by collectors and institutions.” What did survive was not well-taken care of or preserved either. Miles again: “[T]he vast quantity of material was just in large piles, usually with the remains of a rotted rubber band holding them in place.” Maybe it is time to give up my ideal vision of Burroughs the collector. That said, I cannot elevate Gysin. In my opinion, he is ultimately a villain. Miles:

The [descriptive} catalogue was made at the request of Kenneth Lohf at Columbia University’s Butler Library who wanted to buy the archive, but obviously needed to know the extent of it first. The arrangement and degree of detail (how many pages, how many annotations) was made according to his suggestions. Unfortunately Brion Gysin was seduced by the idea of a secret Vaduz bank account, and the collection was sold instead to Roberto Altman for the same money.

Ultimately, it was Gysin who set back Burroughs studies for decades.

I have written in my top 23 Burroughs collectibles essay on RealityStudio about how important the Burroughs archive was to his creative output. I suggest you give it a read if you have not already. I will not belabor the point, but it is my opinion that much of Burroughs’ greatest and most experimental work in part came from processing what he had collected and archived of himself. For example, the practice of scrapbooking, which is one of the major mediums of Burroughs the artist, is intimately related to the practice of collecting and archiving. Oliver Harris in his Restored editions of Minutes to Go and The Exterminator demonstrates how Burroughs used his own writing as well as newspapers and magazines as source materials for new works. Scholars and historians will contextualize the importance of Burroughs’ archive, but Burroughs himself in his cut-up novels and experiments put that archive to creative use and that is one of the hallmarks of a great collector. A great Burroughs collector will mine his own collection and create something that will add to the collection such that a great Burroughs collector will collect not just Burroughs but also himself. Burroughs may not have done it first, Kerouac and Ginsberg did in their novels and poems, but Burroughs did it in the most interesting, comprehensive, and experimental fashion. 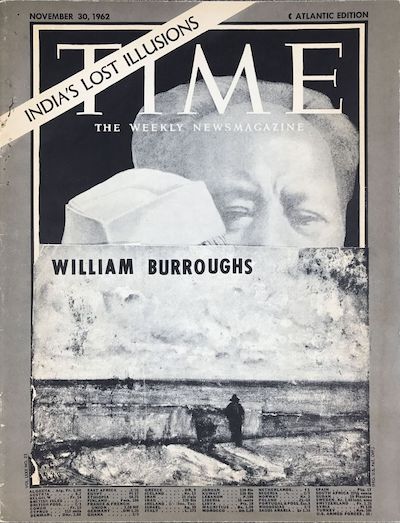 Any serious reader of an author will at some point inevitably become a collector of that author. If you read an author deep enough, searching out an out of print or rare edition becomes a necessity in order to read that book. The C Press Time or the Beach Books APO-33, to say nothing of the cut-up gems in the little magazines, are rather far down on the reading list of most readers familiar with Burroughs. These books are long out of print and in the case of Time rather expensive on the rare book market. This is no loss for a casual understanding of Burroughs. But if you really catch the bug, it becomes a problem. So being an obsessive reader of Burroughs generally leads to being an obsessive collector of Burroughs. This is a common occurrence.

For many readers this is a curse and merely inconvenient; for a select few, it is a curse that dogs them for the rest of their lives. It is as if Burroughs is a pusher indoctrinating readers into the underworld of book collecting. He gives you a taste with an inexpensive reprint of Naked Lunch or Soft Machine tracked down online or from a used bookstore; then you get hooked to the rush of acquisition and possession and find yourself selling plasma to buy Olympia Press editions or the early magazine appearances of those novels. Casually reading Burroughs leads to acquiring a rather expensive habit.

Written by Jed Birmingham and published by RealityStudio on 13 March 2021.