The “bibliographical nightmare” of My Own Mag was more likely to be caused by oversight than by design. The oversight is understandable: the period of My Own Mag was one of the busiest of Nuttall’s life. He was a married man with four children not yet teenagers, holding down a full-time teaching post. In the period 1963 to 1966 he produced 4 books of poetry and a novelette, exhibited in various venues with Group H, was involved in Sigma. He was the main mover behind the sTigma event, and played jazz cornet regularly. In 1966, he played a leading role in the founding of The People Show. He had a large international correspondence and was a sociable man. Ray Gosling: “Two in the morning. Cabs flying. Falling asleep. And the work was done you know. Pieces written. Films made. Audience enlightened. Parts played. Music performed: cornet con brio.”

At the same time he was editing, drawing, laying-out, stencil-making, printing, cutting-up, assembling and distributing My Own Mag. Small wonder bibliographical considerations were overlooked until Burroughs gently nudged Nuttall’s elbow — “…(For Christ sake J.N. date your issues)..,” [Issue 11, page 9 (The Moving Times)]. Issue 11 became the first dated issue, and the remaining issues were either dated, numbered — or both.

But there is a bibliographical trail and it’s laid in the strip cartoon “Perfume Jack” which runs in all issues except 12, 14, 15 and 16. This trail confirms the Sinclair bibliography, which is also the Nuttall website bibliography.

In issues 1 and 2 the strip starts as a simple detective story, the summary at the head of the story in issue 3 confirming the order of issues 1 and 2. Issue 3’s tale turns to fantasy, and leads directly into issues 4 and 5. In issue 5, the Tangiers Special Issue, PJ lands by magic carpet in Tangiers where he is met by Burroughs and his “companions” Sidney Greenstreet and Peter Lorre.

Now the strip cartoon turns into a Greek chorus, commenting on the content of the magazine. In issue 6, the parti-coloured issue, PJ is still in Tangiers. In issue 7 he moves to Brassnose Park and meets a group of Scots whose leader is Trocchi — a direct lead into issue 8 — the Edinburgh Festival issue. In that issue, in one frame, the Edinburgh skyline is drawn above the Tangerine casbah, and the next frame takes us into SIGMA.

In the next three episodes Nuttall kills off and buries Perfume Jack, but the trail is still clear. MOM 9 starts with a mention of Trocchi and ends with a happy mushroom cloud which metamorphoses into a bad news frame starting MOM 10, ending with the NEWS that PJ is dead. 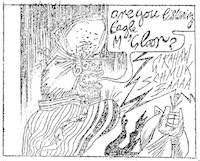 MOM 11’s episode begins with a wonderful drawing, balloon dialogue “are you listening Eagle M’Gloor?” In this issue the peek-a-boo (Sinclair’s words) cuts through a frame. It ends with a death-mouth chorussing an ad for an exhibition at Better Books.

The “Dutch Schultz Special” (issue 13) has only two contributors, Nuttall and Burroughs. The original manuscript of Burroughs’ The Dead Star in offset facsimile forms the last 7 pages of the issue. Nuttall’s contribution, entitled The Dying Words of Perfume Jack, is a four-page 28-frame strip immediately preceding Dead Star. It tells of the death of Perfume Jack at the hands of Mad Dog Coll in virtuoso artwork; the dialogue is laced with snatches cut-up and pasted from Dead Star. The piece shows Nuttall in conversation with, and paying homage to, Burroughs.

In issue 17, a bravura strip of over 50 frames, Perfume Jack and Clifton de Berry work together to bring the curtain down — on both the cartoon and My Own Mag. Both PJ and CdB use the jazz device of one of Nuttall’s heroes, Louis Armstrong, introducing the sidesmen of the band, with little solo riffs. Two-thirds of the way through, CdB introduces Nuttall’s epilogue, and the strip finishes with a final critical coda from the pair, and a last frame of CdB in manic glee.

The strip cartoon device, in various inventive forms, was used repeatedly by Nuttall throughout his oeuvre. The most straightforward examples are the series of strips in Knuckleduster Funnies in the mid-’80s — Dealth Farley, Gin Morley, John, and Jake Todd. The latter chronicles the adventures of a hapless newspaper hack, his involvement with a secret service agent, and the assassination of a lightly-disguised British woman Prime Minister.

In the early ’70s Nuttall did a suite of etchings “The Christmas Sequence” which in toto can be read as a strip cartoon.

In 1984, while visiting artist at Deakin University, Geelong, Australia, he painted a series of strip cartoons on cushions which were hung as mobiles. Unfortunately these works are now believed lost although I have just tracked down a set of photographs. 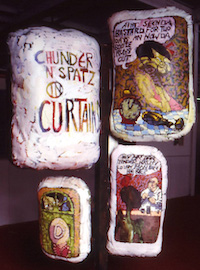 At the Dean Clough Retrospective Exhibition (Halifax, Yorkshire) in 1990, a recent series of strip cartoon paintings was first exhibited. Eric Mottram wrote: “[The] surfaces [of the Portuguese paintings] are wrought with expressionist paint in strong inventive colour designs — so are those of the sectional, strip-cartoon based recent works in 1989-1990.” The series of gouaches dating from 2002, and now framed together, “Studies for an Unpublished Novel” is also a strip cartoon — without dialogue.

All the strip cartoons are to some extent autobiographical, as is a majority of Nuttall’s work. In Perfume Jack, Clifton de Berry and Jake Todd, we find not just pseudonyms but alter egos. He inhabited his characters. Some months after the last issue of Knuckleduster Funnies was published I received several postcards from Portugal signed “Jake” — he was still assuming the persona of Jake Todd.

It is unfortunate that Nuttall’s own genius, demonstrated repeatedly in his complete oeuvre, is overshadowed in MOM by the importance placed by certain commentators on Burroughs’ contributions.

Written by Robert Bank and published by RealityStudio in February 2007.