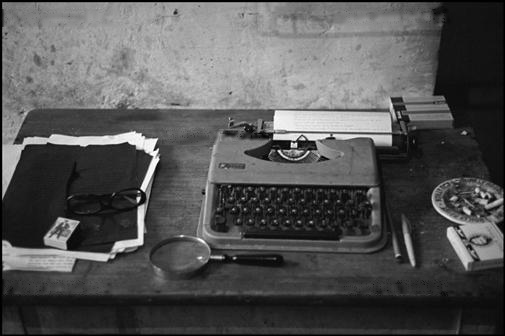 William Burroughs’ typewriter at the Beat Hotel in Paris

Burroughs means different things to different people. Nobody obsessed with Burroughs fixates on the same writer, artist, or man. In fact some of us, the truly delusional and hopeless cases, are fascinated by what amounts to a sickness-induced hallucination. Sometimes when I am reading Burroughs these visions are as real as the headlines in the September 17, 1899 New York Times.

My Burroughs was a sheep-killing dog in a former life.

My Burroughs was born on St. Valentine’s Day in Chicago just down the street from 2122 Clark Street.

My Burroughs went to school at Los Alamos and dispersed blue effluvia throughout the site, years before the atom bomb.

My Burroughs took a bicycle ride with Albert Hoffman in the 1930s. They talked about St. Anthony’s Fire and The Devils of Loudun on a crisp fall day in the countryside of Switzerland.

My Burroughs cut off his finger out of love for Jack Anderson and sent it to Arnold Gingrich at Esquire for publication. Gingrich sent Burroughs a note back reading, “I greet you at the beginnings of a wonderful career, when do I get the corpse?”

My Burroughs worked for the OSS under Wild Bill Donovan in World War II. He came up with the idea of Major Martin in Operation Mincemeat and cracked the Enigma machine by cutting up Nazi documents.

My Burroughs resigned from the OSS when his request that Allied forces bomb train lines to Auschwitz fell on deaf ears. Disillusioned by the war, Burroughs wandered the docks and subways in New York City and met Herbert Huncke, Jack Kerouac, and Allen Ginsberg. Burroughs appears in their work but entirely in dedications, parentheticals, and footnotes, as well as cryptic mentions in interviews and letters.

My Burroughs ran one of the largest marijuana farms in Texas. He was never busted due to his service in the war but was told to shut down and leave the country.

My Burroughs never shot Joan Vollmer at the Bounty Bar. They met at Columbia in the 1940s and had a brief relationship but Burroughs brushed her off because he “didn’t want to be tied down.”

My Burroughs ran into Charles Olson in the Yucatan while both were studying Mayan culture. Olson’s letters to Burroughs as well as Robert Creeley would be published by Divers Press in 1953.

My Burroughs wrote Junkie for Ace Books; it was published dos-à-dos with Jim Thompson’s The Killer Inside Me.

My Burroughs had a tortured obsession with Lewis Marker and wrote Queer. The book was published pseudonymously under the name William Lee. It quickly became a cult classic of forbidden literature.

My Burroughs taught at Black Mountain College for two days in the summer of 1955, reuniting with Olson. He taught a class on General Semantics, the General Theory of Addiction, and Mayan glyphs. The lectures resulted in one of the first instances of student revolt as the campus erupted into paroxysms of ecstasy and violence.

My Burroughs fled Mexico following the publication of Queer and the tragic death of Lewis Marker when he and Burroughs were ambushed by a local tribe while searching for yage in Peru. He wrote about the trip and the death of Marker in The Yage Letters, a collage of a detailed account of the attack, routines, travel journals, love diary, intricate and compact writings on psychedelic plants in the manner of Zukofsky’s 80 Flowers, and prose poems. In the introduction to The Yage Letters, Burroughs writes of Marker’s death, “I have come to the horrifying conclusion that I now desire the contact of mind to paper more than human intimacy.” The introduction and excerpts from The Yage Letters would later appear in the same issue of Life as R. Gordon Wasson’s account of mushrooms.

My Burroughs, in search of solitude after Marker’s death, headed to Tangiers where he immersed himself in drugs and stared for hours at a single, blank sheet of paper. While in Tangiers, he met Brion Gysin in a narrow, non-descript alleyway as both men had gotten lost separately, while each was en route to an introductory kif session at a café set up by Paul Bowles.

My Burroughs would write a novel that drove everybody sane, for the world was already in the throes of insanity.

My Burroughs took the drug cure with Dr. Dent and headed back to New York City to work as an executive alongside his father, who was President of Burroughs Corporation. He wrote Naked Lunch on company stationery during his lunch hour.

My Burroughs came in contact with the cut-up through Brion Gysin who discovered the technique while cutting through an article on Burroughs Corporation in Time, while matting paintings in Paris. Burroughs would pursue this enigmatic technique for the rest of his brief literary career.

My Burroughs, obsessed with the cut-up, dropped out of society and prolifically published in the little mag and small press scene.

My Burroughs holed himself like Howard Hughes in the Chelsea Hotel and severed all ties with human contact. The sound of a typewriter and scissors floated down the hallway at all hours. Periodically, fat envelopes of cut-ups would appear at the offices of underground newspapers without a letter of introduction or a return address. Upon learning of Burroughs’s submissions, thousands of forgeries began arriving as well. In some cases, Burroughs would cut-up and return the forgeries. In the late 1979, Semiotext(e) published a 23-volume set of all the existent documents related to this period, thus setting off a frenzy of attribution among academics that continues to this day.

My Burroughs, on January 14, 1967, was heard to have fired a single shot in his locked hotel room. Police and residents arrived in minutes and broke down the door only to find a completely empty space.

My Burroughs was rumored to have accompanied Michael Herr on assignments in Vietnam. News reports in the form of cut-ups would turn up in the hands of Ed Sanders and Ted Berrigan postmarked from Khe Shan, Cambodia, and Laos. A decade later, he materialized on the set of Apocalypse Now to shoot a cameo based on his experiences in Vietnam. Upon editing the footage, it was discovered that all scenes involving Burroughs were overexposed and therefore cut from the original film. In the director’s cut, Burroughs’ scenes were re-inserted “as is” without sound. In the research for the Hearts of Darkness documentary, a single document was discovered testifying to Burroughs’s presence on set: a photograph of what is clearly Burroughs’ shadow wavering on a wall beside Brando and Hopper.

My Burroughs turned his back on literature and rumors of his whereabouts circled the globe like the myth of Prester John. His grainy image would turn up in the back pages of local newspapers in Afghanistan, Iran, Chile, Colombia, and China.

My Burroughs’ last known communication was a 23-hour audio tape collage of full of gunshots, droning music, hypnotic beats, recorded body sounds, illegible snatches of Burroughs reading, and staticky cut-ups of anti-drug PSAs and Ronald Reagan speeches. It arrived at the New York offices of the Burroughs Corporation in a simple padded manila envelope that was covered with postmarks and addresses made illegible by over-stamping and damp staining. The tape was immediately bootlegged and disseminated underground. The tape became a favorite at raves sometimes with tragic results. In 1993 in Ibiza, a dozen ravers died of exhaustion during a rare performance of the complete tape.

My Burroughs never existed and is the true hombre invisible.

Written by Jed Birmingham and published by RealityStudio on 29 August 2011.

11 thoughts on “My Burroughs”