Rolling Stone magazine just celebrated its 1000th cover with a tribute to / touching up of the legendary Sgt. Pepper album cover. Reportedly, the new cover cost over $1 million to produce. It is fun and interesting, but I doubt it will reach the iconic status of the Sgt. Pepper original or even make the top ten Rolling Stone covers. Enduring images on albums and magazines are hard to consciously generate. They seem more spontaneous or natural. They rarely celebrate milestones or are officially commissioned for special events. Sgt. Pepper is unusual in that the Beatles openly sought to create the greatest album cover of all time and miraculously may have succeeded. Like the Beatles’ music in the album, the cover could only be created in the studio dependent on meticulous staging and artifice. Images of such power usually contain an element of chance and / or luck or at least they give off that vibe.

Annie Leibovitz’s photograph of a naked John Lennon entwined with a clothed Yoko is the greatest Rolling Stone cover and one of the most important rock and roll images of all time. Clearly, the scene was staged but it seems so natural and so emblematic of the relationship of John and Yoko. No other image could capture the essence of John Lennon as the world attempted to express their feelings and thoughts about him shortly after his assassination. Obviously, Leibovitz did not plan for her photo to be associated so closely with Lennon’s death and legacy as she took the photos on the last day of his life. Without planning it, Rolling Stone had the perfect image for a celebration of Lennon’s life. Fate played quite a role in the photo’s enduring status.

From David Cassidy to Jennifer Aniston, naked celebrities prove to be some of the most memorable images in the history of Rolling Stone. The David Cassidy cover (also taken by Leibovitz) from 1972 is relevant to RealityStudio. An early and extensive interview with William Burroughs by Robert Palmer appears in the issue. Cassidy was hoping to spice up his squeaky clean teen image with a more adult look. He definitely received increased attention due to the controversial photo, attention he tried to live down later. The Burroughs interview, like a similar one with Philip K. Dick in the mid 1970s, introduced the cult writer to a larger audience as well as explaining the major themes in his work. The interview would prove to be one of the most important given by Burroughs. The 1965 interview by Conrad Knickerbocker in Paris Review may equal it. Not surprisingly, this issue of Rolling Stone is collectible and frequently appears on eBay where it always receives active bidding. 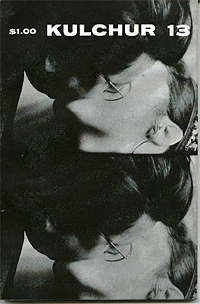 As I was scanning images of Kulchur and Fuck You Magazine for RealityStudio, I came across two related cover images that highlight the reasons why I prefer Fuck You Magazine to Kulchur. I have discussed in detail the Couch cover to the Mad Motherfucker Issue of Fuck You Magazine. Interestingly, Kulchur featured a related image on the cover of Issue 13. Issue 13 reproduces a still from Andy Warhol’s movie Kiss just as Fuck You reproduced a still from Couch.

The Couch cover is one of the prides of my book collection. Kulchur magazine is an essential part of my collection but not an item I return to again and again. The Fuck You cover is a highly sought after Warhol collectible and a work of art in its own right. The reason for this is how the Couch and Kiss covers were produced. I assume the Kiss cover was created using the offset printing technique that produced Kulchur magazine. Just how the image went from celluloid to magazine cover I am unaware, but it was a fairly standard process of commercial printing.

The Couch cover is a different story and involved a newly emergent printing technology of the 1960s that inspired several artists such as Warhol and Wallace Berman. Thermofax is a wet process predecessor to the Xerox. According to Art Cloth Studios, “Thermofax screens are lightweight silk screens, created using a thermal imaging machine. The machine is designed to bond a plastic/polyester film temporarily to a carbon (dry toner) photocopy. Releasing the temporary bond creates a silkscreen image that is photographic in quality. These screens last for hundreds of printings and can be used with all wet media, including thickened dyes, discharge chemicals, all textile paints, foil adhesives and resists.” 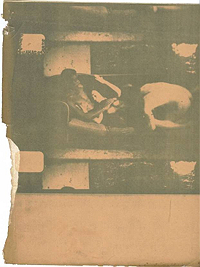 In 1964, Warhol and Gerard Malanga began experimenting with this new technology. One direction these experiment took was collaborations with Second Generation New York School poets, like Ted Berrigan and Ron Padgett. 2/2 Stories for Andy Warhol published by C Press is one example. In Andy Warhol, Poetry and Gossip in the 1960s, Reva Wolf describes this publication in detail. The book consists of ten sheets of the exact same text — a page from an early twentieth-century novel. Padgett selected the page so that it can be read as a loop; that is, the first sentence can be read as if it follows from the last one. The book was read in February 1964 by Padgett, Joe Brainard, Ted Berrigan and the poet Dick Gallup, with Warhol in attendance, along with Gerard Malanga, Edwin Denby, John Giorno and a reporter from Life. When Berrigan published Two Stories as a book, he procured for the cover design a Thermofax copy of a two-frame still (paralleling the ‘Two Stories’ of the title) from an obscure Warhol movie — an image rather hard to read, but clearly a scene showing one man (apparently Robert Olivo, known as Ondine) receiving oral sex while another looks out toward the camera. The Couch cover of Fuck You recreates a similar scene. The Thermofax, like the silkscreen, provided another way for Warhol to distance himself from artistic creation and introduce the machine into his creative process. In addition, Warhol could incorporate elements of repetition as well as explore the relationship of original/copy that so dominate his art.

Wallace Berman was interested in similar themes. Not surprisingly, he utilized the early photocopier in his art from the 1960s until his untimely death in 1976. Verifax, another wet process copier, was an early photocopying technology made by Eastman Kodak. They were forerunners of dry photocopy machines like Xerox. They had a duplicating machine that worked much like developing print film. You exposed a document for a number of given seconds (depending on color of the paper) and then immersed it in a developing solution for a further given number of seconds and then drew the “negative” and the paper the image was to be copied on out together between a “squeegee”.

The emblematic image of Berman’s work of this type is the disembodied hand holding a small transistor radio. Inside the radio, Berman photocopied drug, religious or animal images. Berman used the Verifax as a means to explore photomontage techniques initially discovered by the German Dadaists. The Verifax could print in negative, a feature Berman made much use of in these pieces.

The Verifax and Thermofax represent a newer, more raw, cutting edge technology as opposed to the more professional process that produced the Kiss image. Interestingly, the image depicted on the Couch cover is more raw and more transgressive than the Kiss cover. Both images and both films address similar themes of the erotic, the mundane, the taboo that so fascinated Warhol. Clearly, the Couch image crosses more boundaries than Kiss. This is in line with the nature of Fuck You Magazine and Kulchur. Fuck You was designed to offend and shock. It is gossipy and full of humor. Kulchur was designed to provide a critical thrust to the material provided in Floating Bear and Yugen. Kulchur is a literary journal that reports and educates. The Kiss cover and its means of production reflect the more conservative nature of Kulchur. Fuck You launched a total assault on the culture. The Couch cover lends ammunition to that assault in what it depicts and how it was created.

1 thought on “Kiss and Couch”