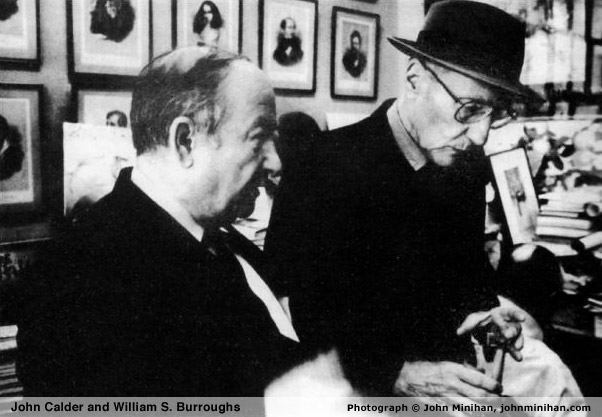 Much has been made of the imperiled state of the print publishing industry. Just this weekend I read a review of a large format art book entitled The Last Magazine. Everywhere you look there is an article on the future of the ebook or the death of print. The mainstream publishers are on life support. The small press lacks adequate distribution systems. Meanwhile, fledgling writers cannot get their books into print, mid-list writers are getting squeezed out of the shelves, and the blockbuster authors hold the fate of the large publishers in their hands as they put pen to paper (or finger to keyboard). Countless literary blogs bemoan the closing of another independent bookshop. As an email from Robert Bank, subject headed “Disaster!,” informed me, there is another potential nail in the coffin.

The legendary John Calder is in danger of completely shutting up shop. In fact for years, he has curtailed his publishing activities, and his backlist and business operations are in a state of disorganization. Like so many mavericks — I am thinking of Maurice Girodias here, but there are several others — the sense of taste, the desire to upset the status quo, the daring in the face of censorship, the love of fine and experimental literature that make a great publisher do not translate into a financially successful businessman.

Rare is the publisher like John Martin of Black Sparrow who combines sound business acumen with exceptional literary sensibility. But even Martin could not run Black Sparrow forever and larger publishing entities (Ecco, an imprint of HarperCollins) stepped in to take over the Bukowski, Bowles and Fante titles. This sale allowed Martin to structure a deal to keep the backlist of Black Sparrow available as well.

Has the Black Sparrow arrangement been valuable for all involved (publisher, writer and reader)? I do not know, but Calder, like Martin, has gathered together a stable of writers to which the reading public should demand access. Calder should be rewarded for the foresight and bravery of getting these writers into print. Like Barney Rosset at Grove and Girodias at Olympia Press, Calder opened British borders and Britons’ minds with publications that challenged the censors and the intellect. Some eighty percent of Samuel Beckett’s output is on the Calder list. Like the Bukowski line at Black Sparrow, it looks like a larger publisher, in this case Faber, will come in and make this work available. What about the other writers published by Calder? Could the proceeds of this sale allow Calder to continue his business or make arrangements like John Martin? Calder published and in some cases holds copyright to Alain Robbe-Grillet, Marguerite Duras, Nathalie Sarraute, Hubert Selby, Henry Miller, Eugene Ionesco, and Henrich Boll. Of additional interest to readers of RealityStudio, Calder brought William Burroughs to British shores, published Alexander Trocchi’s Cain’s Book, and holds the rights to various works of Jeff Nuttall.

In the Times article, Calder states, “I am a great believer in chance… Something might come up, to keep us going.” Hopefully so. Calder also states, “I don’t think there’s ever been such a philistine era.” Maybe so. Clearly, there is a crisis in print culture at every level. Print is in a time of remarkable flux and change, maybe as sweeping as that of its birth in the mid-1400s with Gutenberg. I do not know what is going to happen and given all that I have read in books, magazines, and the Web or have heard in conversation at bookstores, libraries, and lectures, I do not think anybody else does either. Clearly, the history of Calder as a publisher and the current precarious position of his titles and his store are a major part of the story at every level.

I would like to celebrate the legacy of Calder in the only way I know how by writing a little about my favorite Burroughs titles published by his company. In previous columns, I have written about Calder’s immense importance to Burroughs as well as the pleasures of the British firsts. So bear with me if I cover some of the same ground and at the same time fail to provide a more complete look at Calder’s relationship with Burroughs or the history of Calder as a publisher. 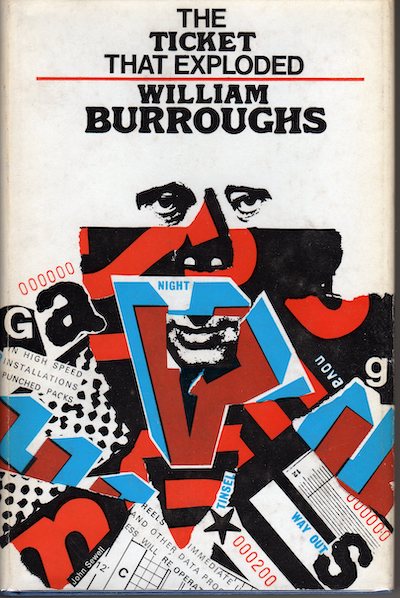 As a matter of personal taste, I much prefer the paperback firsts of Burroughs over the hardcovers. I return again and again to the Ace and Digit Junkies, the Two Cities Minutes to Go, Auerhahn’s The Exterminator. Give me the Olympia Press titles over the Grove counterparts. The Calder editions of Burroughs’ work are in some cases an exception to that rule. Calder’s hardcover of Soft Machine is not one of those efforts unfortunately. Quite possibly, this edition is my least favorite Burroughs hardcover. It is the most boring design-wise. But don’t judge a book by its cover, because as the discussion forum makes clear, Burroughs heavily revised Soft Machine from Olympia Press to Grove to Calder. As a result, the British edition is invaluable and a must-have.

Much more interesting on a visual level is the Calder Ticket That Exploded hardcover. This is a very pleasing title and the fact that my copy is inscribed by Burroughs to his British agent at the time makes it more so. Unlike Soft Machine, the British Ticket reprints the Grove edition without further edits. So what lies between the covers proves less interesting to those who possess the American edition. Even so, the cover art that hints in basic design to the Grove dust jacket makes the British first a desirable object.

Dead Fingers Talk published by Calder in boards in 1963 is one of my favorite books soft or hardcover. I find the dust jacket to be stunning. The front reproduces the Olympia Press covers in a montage by Ian Somerville. The manipulation of images by Somerville (reproduction and reduction of the jacket covers into a mosaic of a larger image) parallels the tape experiments of the Beat Hotel period and beyond. The photo of Burroughs on the back cover is haunting, the very representation of el Hombre Invisible. I love the disembodied hand across the cover that bring to my mind Burroughs’s Van Gogh act of the early 1940s when he cut off his finger in an act of desperation and passion.

To my understanding, Dead Fingers Talk is an assemblage of the Olympia Press titles under one cover. Calder issued the book after the international coming-out party of the Edinburgh Writers Conference of 1962 in order to capitalize on Burroughs’ celebrity and to prepare the way for Naked Lunch. Contrary to popular belief, the UGH correspondence in the Times Literary Supplement developed in response to the publication of Dead Fingers Talk, not Naked Lunch. To my great embarrassment, I have never read Dead Fingers Talk since even the 1970s reprint I have is not a true reading copy. Why has this largely unknown title by Burroughs fallen out of print for so long and to my knowledge never been made available in the United States? Hopefully, Calder or another entity will reissue it again in an affordable paperback in Britain and abroad. Secondhand, I have heard that Dead Fingers Talk differs from its original sources, but others have told me that it is a simple cut and paste job. I would like to experience it for myself. 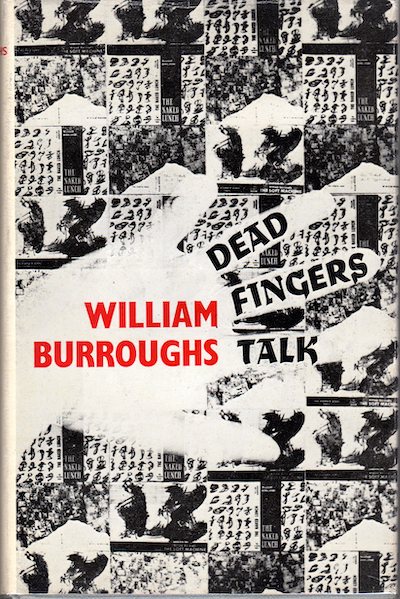 Dead Fingers Talk bears the Calder and Olympia Press imprint. Throughout the fifties and sixties, Olympia Press introduced numerous authors of the Calder and Grove stables first. Olympia Press pornography encompassed some of the best outlaw writing on sex, drugs, and the emerging counterculture. Grove repeatedly reissued the Olympia Press list and Calder did too, most notably with Beckett and Burroughs. As I mentioned above, Girodias, Calder, and Rosset are the three amigos of independent publishing to me. Not only their publications overlap, their personal histories possess many similarities as well.

Every book collection has gaping holes: the empty spaces in the bookshelf waiting for the presently unobtainable, but desperately desired, book. A signed British first of Naked Lunch (1964) is one such title. It is possibly the most obvious gap in my collection. Like Dead Fingers Talk, the Calder (again in association with Olympia Press) Naked Lunch is a visually arresting title, due to the spectral visage of Burroughs on the front cover. The cut-out of Burroughs refers to the cut-up and the red eyes present Burroughs as demonic. The eyes remind me of the Norman Mailer quote that Burroughs was the only American author possessed by genius. The idea of demonic possession threads through Burroughs’ work and his literary theories, most notably and tragically in the introduction to Queer involving the Ugly Spirit.

I love the look of this book even if its white dust jacket makes getting a crisp, bright copy a tough order. I haven’t lacked the opportunity although signed copies hover at the $1000 mark and in some distressing cases double that amount. Unsigned copies are much more common and lately a copy with a wraparound band popped up on eBay. I was unaware of the band, but such added touches are not unheard-of in Burroughs’ publishing history. The Two Cities edition of Minutes to Go should have a wraparound band. Some copies of the Grove Naked Lunch possessed bands as well stating “Recommended for Sale to Adults Only.” These ephemeral pieces are usually torn or even worse missing altogether, ripped apart and thrown in the trash in the process of reading the book.

For much of Calder’s fifty years in publishing, Burroughs has been a defining presence on the maverick publisher’s catalog. Yet this should never be considered a one-sided relationship. Calder was instrumental in introducing Burroughs to a larger audience that extended beyond Great Britain. The Edinburgh Writers’ Conference made Burroughs an international celebrity and Calder continued to champion Burroughs’s work on the world stage from that point on. At one point, Calder nominated Burroughs for the Nobel Prize. If Burroughs would have won such an honor or if he was even seriously considered, the faith and dedication of the fearless Scotsman would have been one of the major reasons why.