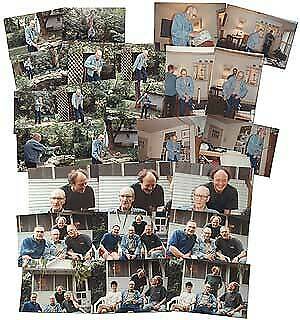 Jackson Pollock was simultaneously made immortal and led down the path to self-destruction by a photographer. Hans Namuth’s photographs and films of Pollock in his studio pushed Pollock’s fame to new levels unexperienced by any previous American painter. But Pollock could not handle the intrusion into his private creative life. After a particularly grueling shoot in bitter cold in November 1950, Pollock had had enough and after two years of sobriety (two years which remain the period of his greatest achievements) Pollock went into a rage and started drinking again. He would go on a bender that would not end until his death in a car crash in August 1956.

Looking at a set of 25 candid photographs of Burroughs during a visit by John Giorno in Lawrence in 1993 on sale by Between the Covers for $3000, I wonder if Burroughs ever considered overturning the table and crying, “Enough!” Like Pollock in Springs, Burroughs in Lawrence had become a tourist attraction, a sideshow freak who represented outlaw American literature. Given that Burroughs experimented with shamanism at this time, did he ever think about the fact that some shamans believed that the taking of one’s photograph also took away a piece of one’s soul? The snapshots, the candids, the posed photo ops snapping away and sapping away at Burroughs’ creative spirit, sucking him dry.

Giorno has no concept of privacy. This is the man who was filmed sleeping by Andy Warhol in 1963. This is the man who wrote Cancer in My Left Ball. This is the man who claimed publicly to be at Burroughs’ deathbed in 1997. Yes, Burroughs and Giorno were “lifelong friends” as described by Between the Covers, but how should we take it that these personal mementos of private moments, like of Burroughs reading or sprinkling food into a fishpond, are now out on the open market? How did these photographs get there? Why are these photographs stamped “Giorno Poetry Systems” other than to authenticate them for the market? To increase their monetary value. Should not these photographs be circulated and appreciated amongst friends and family? Are readers of Burroughs and Giorno by implication to be included in this circle?

For a professional artist and writer, one who makes his or her living through the creative process and even more through the transformation of autobiographical content, what is off limits to the public who consumes that work for a price? Is there such a thing as a room or studio of one’s own? And if not can one create in such a situation? Can one live in such a situation? Pollock could not. Further what are the consequences and responsibilities of an individual who happens to buy them? Are these photographs any more interesting or valuable than the collector’s own candid photographs, collecting dust in photo albums or being ignored on iPhones? Should these photographs be treated any differently than a writer’s personal letters or emails, which are routinely collected for public consumption and academic study? And if I feel they are different? Why do I feel that way? These are the thoughts that come to mind in looking at this set of photographs being offered by Between the Covers rather than any curiosity about the mundane details of happened on what appears to be the mundane day of a mundane looking old man. And in those questions lies these photographs’ real value.

Written by Jed Birmingham and published by RealityStudio on 23 June 2019.
John Giorno