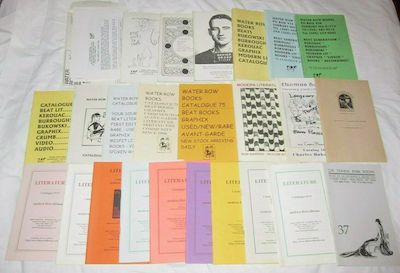 Sitting in my basement (I know, never store books in the fucking basement. Shoot me, I am out of space) in an archival box is a collection of book catalogues from the mid-1990s from when I first started book collecting. At the time, I got my mail sent to my work address because I was living in a glorified drug house on the fringes of the George Washington University campus. For $300 a month I was willing to live anywhere. Nowadays I still get my mail delivered to work because of the prevalence of porch pirates in my neighborhood. The thought of somebody stealing a package from Muss-Dog is just too much to bear. Things haven’t really changed I guess. 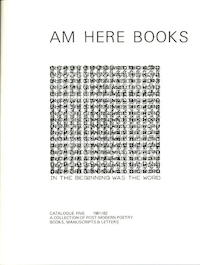 Now these catalogs are not the true blue collectibles, like the Am Here Books Catalogue Five, but I kept them nonetheless because every once in a while I like to reminisce about the days of yore when Floating Bears were $15 and Fuck You mags were $75. They are also important resources, useful for tracking overtime, not just prices but also in determining how common certain items were on the market, provenance, and other bibliographic details. Plus catalogs and bibliographic shit are just plain cool. Others must agree because there is a steady stream of general book catalogues on the various online sites.

For example, eBay is currently offering 25 catalogs from around mid-1990s from dealers like Water Row, Bert Babcock, Rob Warren (Skyline Books NYC), and others. The catalogs are being hyped mainly as Bukowski and Kerouac related items but all our friends are sure to be there including Burroughs. A couple of the catalogs have some annotations in them from the previous owner, a book collector obviously, who notated potential buys and considerations. If this was a collection of French book catalogs from the 1700s, this would be considered primary information of the utmost importance, information such as the likes of Robert Darnton utilized to write game-changing studies of reading and buying habits that led to the French Revolution.

Yet I would argue that there is something historical of note regarding these book catalogues from the mid-1990s. They are relics from the dawn of another Revolution. These catalogues document the transition of the book trade from the world of printed catalogues, want lists in the AB Bookman, phone calls and mailed correspondence to dealers to the world of online bookselling. By 1995 people in Silicon Valley knew all about the Internet but the world of online sales and mainstream Internet use was just beginning. The Netscape browser was available in 1995. Hotmail started in 1996, although AOL began earlier than that. The first secure online sale was made in 1994. Amazon and eBay started in 1995. But the Internet was in only about 33% of homes in 1999. Fifty percent by mid-2001. These 25 catalogues are on the pivot point of the turn from print book catalogues to digital bookselling. Sure, print catalogues still exist and for some book dealers they are still sales tools of primary importance, but they are no longer used by much of the industry. I would guess almost all book dealers use print catalogues in conjunction with a digital presence.

As documents of this period of transition these catalogues become important for studying the effect of the Internet on the rare book industry. By comparing these to later catalogues one can see how the Internet changed prices, rarity, marketing, and desirability. Quite possibly catalogues of this type will be used for a future dissertation or academic study along the lines of Darnton’s study of the book trade before the French Revolution.

Academics aside, and as I mentioned earlier, for collectors of a certain age, these catalogues are great sources of nostalgia. With obsolescence comes the fetish. Rob Warren will always have a place in my memory as being the location of my first major Burroughs purchase. Ground Zero for an obsession that has now lasted half my life. I am less familiar with the other booksellers. I dealt more with Skyline (CA) and JD Books (remember Jonathan Baker!! I heard from him a few years ago. He is still lurking around out there) than Water Row, although I have one fond memory of Water Row that seeing these catalogues on eBay brought back to mind.

In the mid-1990s around the time of these catalogues, my father was aggressively trying to get me to jump in with both feet into book collecting. He took me to a major collector of William Carlos Williams to inspire me to see what was possible; he took me on scouting trips throughout Connecticut; and he bought me books, like the holiday pamphlets of Robert Frost from Spiral Press, to whet my appetite. On one of these scouting trips, my father took me to Water Row in Sudbury, Massachusetts. It must have been very early in my interest in book collecting because I had never been in a bookshop that specialized in the Beat Generation and New American Writing before. In short, I had never seen so many incredible books in one place. And let me tell you I was absolutely terrified. As I have written before, starting out as a collector I had absolutely no confidence and was worried about making a mistake in any purchase I contemplated. At Water Row there was no danger of making a purchase as besides being fearful I was also incredibly cheap. I had never seen such wonderful books yet I was not at the point as a collector where I valued them enough to actually pay for them. 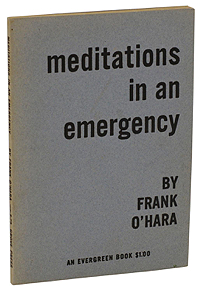 I remember only one book from that trip to Water Row with my father. A copy of Frank O’Hara’s Meditations in an Emergency, published by Grove Press in 1957, inscribed by Frank to Barbara Guest. The inscription was “It’s Larre’s, Frank” and the price was $2500. To this day, this is still one of the coolest things I have ever seen. And shows like Mad Men, and the lost world it depicts, have only made it cooler to the general public. To have gone to lunch with Frank and Barbara at Larre’s!!! You can only dream. And let me be clear, this may all be something of a dream. The trip to Water Row with my father has become to me more than a mere fact, it has become mythic. To be honest, I do not know now if it even happened like this or happened at all, but that is how I remember it. And that is how it is. Seeing these catalogues on eBay brings me back to a crucial pivot in bookselling history that I experienced firsthand as well as a crucial point in my own book collecting history. If someone did not make this period up, it may have been too good to be true. Such were those wonderful days before the Internet changed bookselling forever. When everything was cheaper and more plentiful. For Bukowski and Kerouac collectors, it was the days of wine and roses. Or was it? For those born out of time, for those who were there and have forgotten or for those looking to write its history, get these catalogues and find out for yourself.

Written by Jed Birmingham and published by RealityStudio on 20 April 2019.

2 thoughts on “Book Catalogues on eBay”