The recent columns on Burroughs ephemera generated a bit of interest in the Burroughs community. Forum member BigTable was kind enough to send RealityStudio scans of his copy of the 1959 Olympia Press Catalog. Comparing the two catalogs proves very interesting. Clearly the publication of Naked Lunch generated tons of publicity for Olympia and Burroughs became something of an avant-garde superstar. Olympia Press’ marketing strategy grows more sophisticated from 1959-1960. Like Grove in the United States and Calder in Great Britain, Olympia Press portrayed itself as an alternative press championing outlaw literature by the likes of Beckett, Sade, Burroughs, and Miller. Rosset called them “Anglo-American sex radicals.” “Dirty Books,” like Sin for Breakfast, might have been the press’s bread and butter, but all the publicity from the mainstream was being created by Burroughs, Nabokov, Maxwell Kenton (Southern and Hoffenberg), and Donleavy.

I also received an email from Eric Shoaf, compiler of Collecting William Burroughs in Print: A Checklist published by Ratishna Books (an imprint of Rock and Roll Research Press) in 2000. 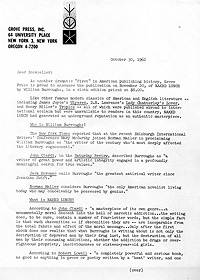 Eric writes, “My only concern about your article on the NL prospectus is that you neglect to mention the letter that accompanied it when it was sent to booksellers in 1962. Perhaps you are not aware of the letter, which is on Grove Press letterhead and dated October 30, 1962 (further bolstering my contention, put forth in my own book, that NL was not published March 21, 1962 as asserted in M&M) and which begins ‘Dear Bookseller,’ and continues for two pages. It includes this: ‘…we have prepared the enclosed brochure which includes a section from the book, together with critical appraisals…'”

“I have a copy of the letter, and while there can be little doubt that some of the copies of the prospectus would have been distributed without it, it is also true that the purpose of the letter was to help convince booksellers that they could legitimately sell the work without fear of arrest. As such, the letter is an integral part of the prospectus, in my opinion.”

He adds, “I put forth the idea in my book that Rosset had about 10K copies (several printings) of NL printed and ready to go and was waiting for the proper time to release it. This may account for why M&M listed the publication date in March. No doubt Rosset had the books in March, but all indications (reviews, publicity) point to an October 1962 date.”

Let me say first get in contact with Eric and buy his checklist if it is still available. It turns up on Abebooks and eBay from time to time. It is a valuable resource and a must for the Burroughs collector. Word on the street is that there may be some more work like the Checklist coming from Eric in the near future. (For a brief review of William Burroughs in Print, see “The Latest Burroughs Bibliography.”) 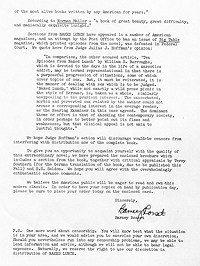 Eric was kind enough to pdf the letter. The letter highlights what I suggested in my column on the Grove Press Promotional pamphlet and added in the Burroughs forum. Rosset clearly manipulated the courts and the media in an effort to defend his books and defeat literary censorship. Like Ferlinghetti with Howl (just on the racks of your local bookstore Howl on Trial by Bill Morgan, get it), Rosset knew what he was doing and had a detailed plan of action.

Rosset states, “We decided the best thing to do was send the book [Lady Chatterley’s Lover] through the mail so it would be seized by the Post Office. The Post Office is a federal government agency, and if they arrest you, you go to federal court. That way you dont have to defend the book in some small town, and you only have one case.

“The Post Office has its own special court, where the judge and the prosecutor are the same man. We brought in all these famous writers and that’s how we did all the important work in this case. The judge, if you can call him that, ruled against us. Even so I felt a great wave of sympathy coming from this guy. The fact that he let us put all this evidence into the record says a lot for him. Getting things into the record was important, because the judge who ruled on the appeal only looked at what’s in the record. They tried to ban Lady Chatterley, because they said it ‘appeals to the prurient interests’ which meant it caused ‘itching’ as far as we could tell. Finally we won the appeal on the basis that the book had literary merit”

I reproduce Rosset’s comments on the role of the Post Office in his battle against censorship again, because like the Grove Press letter, it shows just how savvy Rosset was in fighting the legal system as well as hammering home the point that Naked Lunch‘s critical reception (and other vanguard novels like Ulysses, Lady Chatterley’s Lover, and Tropic of Cancer) was dominated by legal issues. Only recently has the focus of critics shifted to a more complete look at Burroughs’ masterpiece.

I am very excited by BigTable’s and Eric Shoaf’s response to the Bunker. Hopefully, these images of the Olympia Catalog and Grove Letter provide as much food for thought for reader in cyberspace as they do for me. In any case, please feel free to respond to any of my columns with corrections, feedback, and of course more information like images, commentary and personal accounts.