It is hoped that this index is the beginning of a larger, growing project.
— Christopher Harter on his Author Index

In a comment thread on the Bunker relating to the scan of the Fuck You Mad Motherfucker Issue, I suggested that individual pages of mimeos would eventually be sold in a manner similar to those of illuminated manuscripts. At the time, such practices were already occurring sporadically with certain covers that were deemed art objects. I am thinking of the Andy Warhol Couch and Denby covers for Fuck You and C, respectively. Since that time, individual pages of Fuck You have come on the market with increasing frequency. These pages feature striking graphics or images performed by that master magician of the stylus, Ed Sanders. 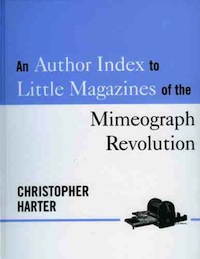 With this type of sophistication and nuance being applied to the sale and collecting of mimeograph publications, the necessity of approaching them with hardcore bibliographic techniques is becoming more and more acute. Christopher Harter’s An Author Index to Little Magazines of the Mimeograph Revolution was much needed five years ago, when it was published by Scarecrow Press. Harter’s book addressed a concern expressed by Charles Brownson in 1983, that the publications of the Mimeo Revolution were underrepresented in little-magazine indices. But much still remains to be done. As Harter stated in his introduction in 2008, “The study of illustrations and the visual aspects of this era’s little magazines have yet to be fully explored.” This statement holds true today. Such a study would make readily apparent, for example, that some recently offered “Fuck You handbills” were, in fact, single sheets removed from the final issue of Fuck You. Even armed with such knowledge, age-old bibliographic battlegrounds start developing. What constitutes a handbill? Is it intention? Is it distribution? Is it format? Is a single sheet of paper with text or graphics on it enough to make it a handbill? Do handbills actually have to be physically distributed? Or did Ed Sanders have to print them with merely the intent to distribute? It crawled in my hand, honest.

Collectors and book dealers involved in mimeo publications are getting a crash course in the most arcane and obscure corners of bibliography. If they do not, buyers beware. I frequently get contacted by dealers asking if a certain mimeo publication is complete. This opens up a whole bibliographic Wonderland and together we can jump down the rabbit hole of “best” copies, questions of collation, and endless discussions of what “complete” means in the mimeo world. Harter writes, “Collation of issues lacking pagination also presented a problem. Magazines such as Ed Sanders’ Fuck You and Dan Saxon’s Poets at Le Metro are examples in which the order of contributors, and in some cases, the works included, varied from copy to copy. In such instances, indexing was based on a ‘best’ copy according to tables of contents or lists of contributors. An effort was made by the compiler to note instances of problematic collation when evident. However, scholars are encouraged to consult multiple copies of an issue when presented with entries that differ from those presented in this index.” The mention of “scholars” jumps out here, as book dealers and collectors probably use Harter’s index much more vigorously and religiously than scholars. This is because there is serious money on the line. With issues of Fuck You, a magazine of the arts and C: A Journal of Poetry hovering around $600-700 an issue, the presence or absence of a single page can have big repercussions. 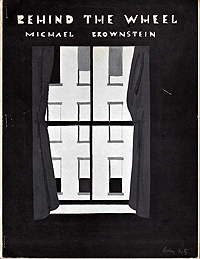 I get contacted about 3 or 4 times a year about Ted Berrigan’s C: A Journal of Poetry. C, like Fuck You and Poets at Le Metro, is a tricky publication. It has no pagination (besides No. 13) and the potential for collation issues. C fooled no less than Clay and Phillips in their Secret Location on the Lower East Side. In their entry on C Press, Clay and Phillips state that C ran for thirteen issues and that the New York Public Library was missing issue twelve. They are right and wrong. There were indeed thirteen issues of C, but Issue twelve was never published, and Michael Brownstein’s Behind the Wheel (1967) was considered by Berrigan to be C #14. Many dealers and collectors were/are unaware of this. Copies of Brownstein’s book were readily available online marketed as a C Press publication, but with no indication that it was, in fact, an issue of C: A Journal of Poetry. When certain dealers got in the know, they smartly bought up all the cheap copies of Behind the Wheel ($45) and marked them up as C #14. Startled book collectors rapidly (and gratefully) bought them up at the now inflated price in order to complete their recently compromised runs of the heavily sought after Berrigan mimeo. Libraries and institutions probably followed suit if they did not already have a copy of Behind the Wheel improperly categorized in their collections as simply a C Press publication. The above scenario must be close to accurate as not a single copy of the once easily accessible Behind the Wheel is now available online.

C is also a fine example of a case where mimeo mags should be judged on a different scale regarding condition. C is comprised of mimeograph legal sheets, stapled three times on the left-hand side. The legal size makes the magazine difficult to store. In addition, the magazine was poorly stapled. Berrigan seemed not to possess an industrial stapler, because often the staples just barely hold the mag together. C was also a legend in its own time and, unlike some mags, was actually read. Obsessively in fact. As a result, C is nearly always beat-up and falling apart. If present at all, the last few pages are rarely attached. Whenever a book dealer or collector handles C, the question of completeness immediately arises, and the process of comparing copies against the dealer copy begins.

Harter writes, “In looking toward future editions or supplements, the compiler invites readers to provide information on corrections or omissions.” As a result, I have compared my copies of C against Harter’s author index. Harter indexed by author, which is not as useful for a collector, dealer or scholar concerned with the contents of a specific issue, like C #10, a particularly large issue that frequently pops its staples. By and large, I went with Harter’s compilations. The integrity of his “best” copy is probably better than mine. This is particularly true of my Issue four, the Edwin Denby Issue with the famous Warhol covers. As mentioned above, this is now considered a work of art and priced accordingly. My copy does not have the covers, and is textually incomplete to add insult to injury. Given the rising price of this issue, I was happy to get my hands on anything. In my opinion, an imperfect, incomplete copy is better than a gaping hole between issue three and five. Likewise my issues 9 and 10 were missing the final page or two. 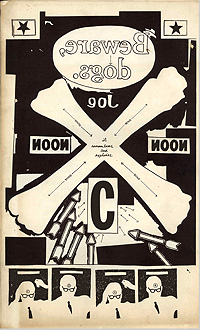 Issue five presented a more complicated and interesting bibliographic point. Just after Leroi Jones’ The New World [34], my issue presents the remaining poems in a different order. Here we get into “a problem” relating to “[c]ollation of issues lacking pagination.” What is the correct order? Is the correct order determined by the order of Berrigan’s original stencils? Were these stencils in fact created and collated in a specific order? Do you go by a publisher’s set, i.e. Berrigan’s own copies kept for his records? Do you compare several examples and let majority rule? In such cases as issue five, I have placed asterisks on those entries that differ from Harter’s pagination.

Issue fourteen provided a similar issue. Harter’s “best” copy did not include two poems I had in my copy: “Lily Flower” [10] and “Waitress” [11]. I contacted Brian Cassidy and his two copies also had the missing poems. How did Harter select his best copy? Did he compare multiple copies? Did he work off of Berrigan’s copy? If he compared multiple copies or against a seemingly definitive edition, what to make of my bonus tracks? Is my copy now a “best copy,” more desirable merely because it has more poems? Is quantity what determines complete? Is more always “best?”

The discrepancies in some issues suggest that the problems created in collation are intentional. In my copy of issue ten, there is an image on page 47 of a couple seated at a table with the caption “when the mercenaries ran away.” In Harter’s Index, there appears to be a gap on page 12. Harter does not index illustrations or images (as Harter admits, a shortcoming of the index that remains a future project) so I am going to assume that this same image appeared on page 12 of his best copy. This suggests that the pages with images were inserted within the magazine by chance rather than based on a pre-set location dictated by a table of contents. Then again, Harter’s copy could have a different image altogether which would in essence make every issue 10 unique.

As Harter states, these indices are “the beginning of a larger, growing project.” The Internet makes possible a Wiki-type situation were other collectors, dealers and institutions can compare their issues of various magazines and publications, like Fuck You, C, My Own Mag, APO-33, or Time just to name a few, to determine an variants or omissions. So to get the ball rolling, I am posting my index here at The Bunker to see if anybody out there has any other variants or deviations to report. This is just the beginning of what may be a quixotic search for that never-obtainable “best” copy. Yet Don Quixote as we all know was an avid collector, and such tilting at bibliographic windmills is what collecting is all about.

View the Index to the Contents of C: A Journal of Poetry

Written by Jed Birmingham and published by RealityStudio on 12 August 2013.