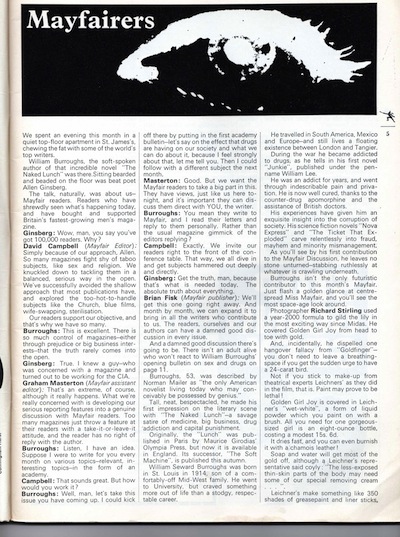 We spent an evening this month in a quiet top-floor apartment in St. James’s, chewing the fat with some of the world’s top writers.

William Burroughs, the soft-spoken author of that incredible novel “The Naked LuncH’ was there. Sitting bearded and beaded on the floor was beat poet Allen Ginsberg.

The talk, naturally, was about us — Mayfair readers. Readers who have shrewdly seen what’s happening today and have bought and supported Britain’s fastest-growing men’s magazine.

David Campbell (Mayfair Editor): Simply because of our approach, Allen. So many magazines fight shy of taboo subjects, like sex and religion. We knuckled down to tackling them in a balanced, serious way in the open. We’ve successfully avoided the shallow approach that most publications have, and explored the too-hot-to-handle subjects like the Church, blue films, wife-swapping, sterilisation.

Our readers upport our objective, and that’s why we have so many.

Burroughs: This is excellent. There is so much control of magazines — either through prejudice or big business interests — that the truth rarely comes into the open.

Ginsberg: True, I knew a guy who was concerned with a magazine and turned out to be working for the CIA.

Graham Masterton (Mayfair assistant editor): That’s an extreme, of course, although it really happens. What we’re really concerned with is developing our serious reporting features into a genuine discussion with Mayfair readers. Too many magazines just throw a feature at their readers with a take-it-or-leave-it attitude, and the reader has no right of reply with the author.

Burroughs: Listen, I have an idea. Suppose I were to write for you every month on various topics — relevant, interesting topics — in the form of an academy.

Campbell: That sounds great. But how would you work it?

Burroughs: Well, man, let’s take this issue you have coming up. I could kick off there by putting in the first academy bulletin — let’s say on the effect that drugs are having on our society and what we can do about it, because I feel strongly about that, let me tell you. Then I could follow with a different subject the next month.

Masterton: sGood. But we want the Mayfair readers to take a big part in this. They have views, just like us here tonight, and it’s important they can discuss them direct with YOU, the writer.

Burroughs: You mean they write to Mayfair, and I read their letters and reply to them personally. Rather than the usual magazine gimmick of the editors replying?

Campbell: Exactly. We invite our readers right to the front of the conference table. That way, we all dive in and gets ubjects hammered out deeply and directly.

Ginsberg: Get the truth, man, because that’s what is needed today. The absolute truth about everything.

Brian Fisk (Mayfair publisher): We’ll get this one going right away. And month by month, we can expand it to bring in all the writers who contribute to us. The readers, ourselves and our authors can have a damned good discussion in every issue.

And a damned good discusion there’s going to be. There isn’t an adult alive who won’t react to William Burroughs’ opening bulletin on sex and drugs on page 11.

Burroughs, 53, was described by Norman Mailer as “the only American novelist living today who may conceivably be possessed by genius.”

Tall, neat, bespectacled, he made his first impression on the literary scene with “The Naked Lunch” — a satire of medicine, big business, drug addiction and capital punishment.

Originally the “Lunch” was published in Paris by Maurice Girodias’ Olympia Press, but now it is available in England. Its successor, “The Soft Machine,” is published this autumn.

William Seward Burroughs was born in St. Louis in 1914, son of a comfortably off Mid-West family. He went to University, but craved something more out of life than a stodgy, respectable career.

He travelled in South America, Mexico and Europe — and still lives a floating existence between London and Tangier.

During the war he became addicted to drugs, as he tells in his first novel “Junkie,” published under the pen-name William Lee.

He was an addict for years, and went through indescribable pain and privation. He is now well cured, thanks to the counter-drug apomorphine and the assistance of British doctors.

His experiences have given him an exquisite insight into the corruption of society. His science fiction novels “Nova Express” and “The Ticket That Exploded” carve relentlessly into fraud, mayhem and minority mismanagement.

As you’ll see by his first contribution to the Mayfair Discussion, he leaves no stone unturned — stabbing ruthlessly at whatever is crawling underneath.

Scanned by Jed Birmingham and published by RealityStudio on 26 Feb 2014.
Interview William Burroughs