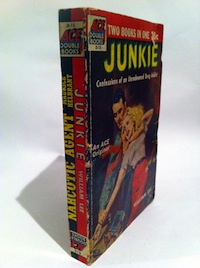 Call me old school but I am a Maynard & Miles Man. I love to get lost in the bibliographic details, particularly in Section A. The publication dates, the measurements, the information on print runs, the points of issue. This gold standard bibliography is a goldmine of information, and one that has yet to be fully excavated. In order to obtain fuller understanding of Burroughs’ work, these bibliographic details matter. Yet too often Burroughs criticism has ignored or misinterpreted them.

Take A1 in the bibliography: the Ace Junkie from 1953. It is common knowledge that Burroughs’ first book was published along with Maurice Helbrant’s Narcotic Agent in an edition that Ace advertises as “TWO BOOKS IN ONE.” Everybody notes that Junkie was published dos-à-dos with Narcotic Agent. Book dealers do it; I do it; even the library of Columbia University does it in their online exhibit on Naked Lunch. If you say a lie a thousand times, it becomes a truth.

Well, I was shocked to learn that the Ace D-15 is not published dos-à-dos at all. From Wikipedia: a dos-à-dos binding “is a binding structure in which two separate books are bound together such that the fore edge of one is adjacent to the spine of the other, with a shared lower board between them serving as the back cover of both. When shelved, the spine of the book to the right faces outward, while the spine of the book to the left faces the back of the shelf; the text of both works runs head-to-tail.” The binding creates a look like that of an accordion.

In fact, the Ace Doubles are published tête-bêche. Again Wikipedia: tête-bêche is “a single volume in which two texts are bound together, with one text rotated 180° relative to the other, such that when one text runs head-to-tail, the other runs tail-to-head . . . Books bound in this way have no back cover, but instead have two front covers and a single spine with two titles. When a reader reaches the end of the text of one of the works, the next page is the (upside-down) final page of the other work. These volumes are also referred to as ‘upside-down books’ or ‘reversible books.'” It has become common in the book industry to label such a binding as dos-à-dos. 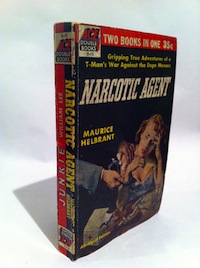 Like much of the seemingly minute details brought up in the Bunker, the question becomes Who Gives a Fuck? Well, those interested in Burroughs should. Clearly, dos-à-dos and tête-bêche bindings suggest a relationship between the bound texts. In French, dos-à-dos means “back-to-back.” This suggests opposition and conflict. The image of a duel comes to mind with the junkie and the narcotics agent stepping off their forty paces in a fight to the death. Clearly this is the relationship promoted by Ace Books. The Helbrant publication provided a counterbalance to the seemingly pro-drug Junkie. They are like oil and vinegar. They do not mix, but they make a delicious combination that makes even junk taste good. On one level, the Ace Books are all about mass consumption and providing an easily digested product.

But that is not the most interesting way to look at the relationship between Junkie and Narcotic Agent. In French, tête-bêche means “head-to-toe.” Unlike back-to-back, this implies a sexual relationship, a 69 position. This is entirely appropriate when one takes into consideration Burroughs’ theories of addiction and his belief in the symbiotic relationship between the police bureaucracy and the drug underworld. They feed off each other; they are parasites that suck each other off. Nowhere is this clearer than in the figure of Bradley the Buyer.

Well the Buyer comes to look more and more like a junky. He can’t drink. He can’t get it up. His teeth fall out. (Like pregnant women lose their teeth feeding the stranger, junkies lose their yellow fangs feeding the monkey.) He is all the time sucking on a candy bar. Baby Ruths he digs special. “It really disgust you to see the Buyer sucking on them candy bars so nasty,” a cop says.

The Ace Junkie is the schlup in book form — Junkie and Narcotic Agent making each other all soft like a blob of jelly and surrounding each other so nasty.

I just finished reading Jerome McGann’s monumental book Black Riders: The Visual Language of Modernism. McGann is a textual scholar, and he has been at the forefront arguing for the importance of graphic and typographic design for investigating literature and for how crucial the book as a material object is for interpreting its meaning. Black Rider is one of the key texts I encountered during my brief time at the University of Iowa, and, over the course of time, I have always associated the book with Burroughs due to the collaboration withwith Robert Wilson and Tom Waits on The Black Rider. This may seem to be only name association but is there anything McGann can say about the work of Burroughs? The entire purpose of the Bibliographic Bunker is to emphatically state, “Yes!!” Burroughs at his best, his most innovative, most influential, and most creative was intimately concerned with graphic and typographic design. This is why the cut-up works are, to my mind, his most interesting work. Time, APO-33, My Own Mag, The Dead Star, the aborted The Third Mind, the aborted Ah Pook Is Here, the countless unpublished scrapbooks and cut-up manuscripts. Burroughs was involved with and thought about the design and production of all these works. Their design and production are inseparable from the text. Burroughs at his worst and least important lets such details be handled by commercial publishers and designers.

Clearly Burroughs had no hand in the design of the Ace Junkie. Yet chance and coincidence are crucial to Burroughs’ writing, particularly in cut-up practice and its effects. For example, Google tête-bêche and the first hit is a Wikipedia page on the term as it relates to stamps. The page features an image of a 1910 Swiss stamp of William Tell’s son with the heading Helvetia. This creates a web of associations involving the William Tell act, Joan Vollmer, Billy Burroughs, and typography (Helvetica), such as how the death of Joan stamped itself on the son’s memory and impressed itself upon his entire life, literally turning his life upside down. Helvetica is the typeface for governments and corporate trademarks. Interestingly, the William Tell incident, of which there are numerous conflicting accounts, has no official version, yet it has become the trademark, defining moment of Burroughs’ writing life, as presented in the introduction to Queer and elsewhere.

By chance the Ace Double as issued could not have expressed Burroughs’ theories on law enforcement and junk culture any better. The binding reveals the big lie of the narcotics industry, so how about getting real and telling the truth about the binding of the Ace Junkie? In the immortal words of Lisa Lisa and Cult Jam, “Who would have thought that we would become lovers / As friends, we were so, so tight / Can’t help myself, you make me feel so right / I got to, got to, got to tell you, darlin’ / Ooh, baby, I think I love you from head to toe.”

Written by Jed Birmingham and published by RealityStudio on 30 April 2012.
Junkie