It is always difficult to establish objective criteria for determining the literary worth of a book, but one possibility would be to consider its filmability. Is it easy to transpose a given book into film? If so, it implies that the qualities that might distinguish the book as a text — a sense of verbal style, for example, or a unique perspective on inner reality such as stream of consciousness provides — are not particularly prominent. The book still might tell a good story, but if it’s easily filmable then you have to wonder if it tells its story in a truly literary way.

By this criterion Naked Lunch would be a masterpiece. Certainly it’s not easy to film, which is why David Cronenberg’s movie — whatever its merits — is less a film of Naked Lunch than a mashup of the Burroughs myth. In fact, few books by Burroughs would be easy to film. (Can you imagine Soft Machine the Movie?) For years there’s been a project floating around for Steve Buscemi to create a film of Queer and/or Junkie. In Last Words Burroughs mentions meeting the actor, but a decade later the project still has not come to fruition. You can imagine, though, that these two early works would be the most easily filmable of any of Burroughs’ texts. Their straightforward, hard-boiled narrative lend themselves to a fine noir film. 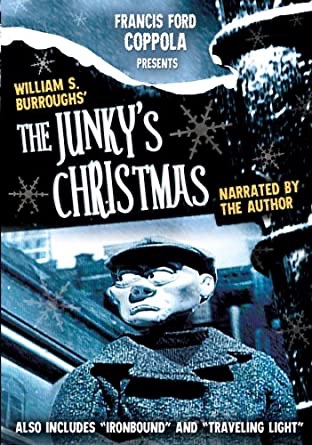 In the same genre is the early story “The Junky’s Christmas” from the Interzone collection. It uses Junky‘s Dashiell Hammett style to tell the story of Danny the Car Wiper, an addict who scrounges up a few dollars in an attempt to score on Christmas day. The descriptive language — “The man had a frog face and Deep South accent. He was wearing a camel’s-hair overcoat.” — seems to promise an effortless transition from the verbal to visual. You can imagine it serving as a sort of trial run for a film of Junky. However, director Nick Donkin’s claymation rendering of the story, available on Koch Vision’s DVD Francis Ford Coppola Presents William S. Burroughs’ The Junky’s Christmas, is far more than a trial run. It’s a small masterpiece.

“The Junky’s Christmas” begins with William Burroughs, seated by a Christmas tree and fireplace, reading from Interzone. (The recording is the same as that found on the Spare Ass Annie CD.) The black-and-white live action gives way to animation, showing junk-sick Danny trying to break into a car. If you tend to associate claymation with goofy features for kids, you quickly realize you’re in a different element with this film. The earthiness of the materials perfectly conveys the grit of the story. By the time Danny gives away his hard-earned shot to a stranger suffering from kidney stones, blunting the “algebra of need” with an unanticipated act of altruism, you can’t imagine a more appropriate way to visualize early Burroughs.

To symbolize Danny’s receipt of an “immaculate fix” at story’s end, the film shifts briefly from b/w to color. Afterward Donkin, an Australian known for his short films, animations, and music videos, returns to live-action Burroughs, showing the aged author enjoying a holiday feast with his Lawrence familiars. Though you get the idea here, framing “Junky’s Christmas” as a twisted version of Masterpiece Theater, the meal footage frankly carries on too long. The taut editing and pacing that characterizes the animation is ruined by this feel-good moment showing Burroughs carving turkey. You’re content to know Burroughs had his circle of close friends — this was a man whose last written words were an endorsement of love — but still the meal scene leaves you with the impression that the director gave in to a temptation for sentiment that Burroughs the artist never would have.

This one scene, however, cannot detract from the brilliance of the claymation film, which is highly recommended. The DVD, produced by Francis Ford Coppola, also contains two other short films unlikely to be of interest to the Burroughs fan. It is available from Amazon or directly from Koch Vision.