In honor of what would have been Kurt Cobain’s 40th birthday on 20 February 2007, RealityStudio offers this dossier documenting the relationship between Cobain and William S. Burroughs. Cobain greatly admired Burroughs, instigating their collaboration on The “Priest” They Called Him and visiting the Beat legend at his home in Lawrence, Kansas. And while Burroughs does not seem to have been especially impressed with the music of Nirvana, he was greatly saddened by Cobain’s suicide. Here is the story.

At Timberland Library [high school senior Kurt Cobain] discovered S.E. Hinton and William Burroughs, whose work would have an increasing influence on Cobain’s life. He read Burgess admiringly and J.D. Salinger without complaint. Cobain hated Scott Fitzgerald, whose critical resurgence was in decline, neither liked nor understood Faulkner and couldn’t talk about Hemingway without losing his temper.

— Sam Kashner, author of When I Was Cool: My Life at the Kerouac School, in a Powells.com interview

When the tour hit Rotterdam on the first of September [1991], it was almost with a nostalgic wistfulness that Kurt approached the last show. He was wearing the same T-shirt he’d had on two weeks earlier — it was a bootlegged Sonic Youth t-shirt — which had gone unwashed, as had his jeans, the only pair of pants he owned. His luggage consisted of a tiny bag containing only a copy of William S. Burroughs’ Naked Lunch, which he had found in a London bookstall.

Kurt’s got a literary bent, and jokes that he likes “anything that starts with a B. I think I like Burroughs best, and I’m into Bukowski and Beckett.” He’s a fan of William Burroughs’ dense style, and admires the “cut-up” writing technique he pioneered in the ’40s, calling it revolutionary.

In the autumn of 1992 Burroughs and Cobain collaborated on The “Priest” They Called Him. (Listen to an excerpt.)

Cobain himself was an acknowledged fan of Burroughs’ oeuvre and first met with his hero in culture-space on a recording entitled The “Priest” They Called Him. This EP is constructed from a reading by Burroughs (recorded at his home in Lawrence, Kansas on 25 September 1992) overdubbed with Cobain’s guitar accompaniment (recorded in November 1992, at Laundry Room Studios in Seattle). Cobain later faxed Burroughs asking if he would play a crucifixion victim in a video for Nirvana’s forthcoming “Heart-Shaped Box” single. Burroughs declined but a meeting between the two was arranged and took place at Burroughs’ home in October 1993. 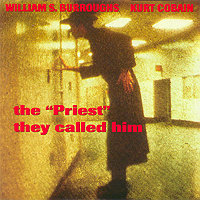 Interviewer: How did you get on with William Burroughs when you recorded together recently?

Cobain: That was a long distance recording session. [Laughs] We didn’t actually meet.

Interviewer: Did he show a genuine awareness of your music?

Cobain: No, we’ve written to one another and we were supposed to talk the other day on the phone, but I fell asleep — they couldn’t wake me up. I don’t know if he respects my music or anything; maybe he’s been through my lyrics and seen some kind of influence from him or something, I don’t know. I hope he likes my lyrics, but I can’t expect someone from a completely different generation to like rock’n’roll — I don’t think he’s ever claimed to be a rock’n’roll lover, y’know. But he’s taught me a lot of things through his books and interviews that I’m really grateful for. I remember him saying in an interview, “These new rock’n’roll kids should just throw away their guitars and listen to something with real soul, like Leadbelly.” I’d never heard about Leadbelly before so I bought a couple of records, and now he turns out to be my absolute favorite of all time in music. I absolutely love it more than any rock’n’roll I ever heard.

Interviewer: The song you’ve recorded together makes references to shooting up, and Burroughs’ own history of drug-taking is no secret. Were you worried that this collaboration might throw the spotlight on press rumours that you’ve had considerable experience with hard drugs yourself?

Cobain: I don’t think it’s any secret any more, it’s been reported so much for so long. I really don’t care what anyone thinks about my past drug use — I mean, I’m definitely not trying to glorify it in some way. Maybe when I was a kid, when I was reading some of his books, I may have got the wrong impression. I might have thought at that time that it might be kind of cool to do drugs. I can’t put the blame on that influence but it’s a mixture of rock’n’roll in general — you know, the Keith Richards thing and Iggy Pop and all these other people who did drugs. I just thought it was one of those things that you do to relieve the pain, but… As I expected before I started heroin, I knew at the beginning that it would become just as boring as marijuana does. All drugs, after a few months, it’s just as boring as breathing air. I’ve always lied about it because I never wanted to influence anybody, I didn’t want anyone to consider the thought of doing drugs because it’s really stupid.

I’ve collaborated with one of my only Idols William Burroughs and I couldn’t feel cooler.

Courtney returns, so we head back downstairs and, after a little difficulty trying to get the tape deck to work, myself and Courtney sit cross-legged on the floor. An avalanche of records surrounds us; Sub Pop singles of the month, Kleenex, Opal, Mudhoney, even Suede is here, PJ Harvey’s “Rid Of Me” is on the turntable, and a few books are scattered on the carpet; John Steinbeck, Jean Paul Sartre, William Burroughs’ Queer. Kurt grabs a book by Leonard Cohen, looks at us bemusedly and retreats upstairs.

What “Heart-Shaped Box” meant to Kurt is best surmised by the treatment he wrote for the song’s video. Kurt envisioned it starring William S. Burroughs, and he wrote Burroughs begging him to appear in the video. “I realize that stories in the press regarding my drug use may make you think that this request comes from a desire to parallel our lives,” he wrote. “Let me assure you, this is not the case.” But exactly what Kurt hoped to achieve by casting the writer was never clear. In his attempt to convince Burroughs to participate, he had offered to obscure the writer’s face, so that no one other than Kurt himself would know of his cameo. Burroughs declined the invitation.

The journals sketch the evolution of the video’s symbol-laden, elliptically autobiographical narrative. At first, it was to star William Burroughs, whom Cobain evidently revered as a long-lived defier of convention (overlooking the fact that Burroughs survived only because he switched from heroin to marijuana early on) and for his aleatoric compositional technique, morbid mythology, and sardonic W.C. Fieldsian cynicism. Here was the first scene, expressing Cobain’s sense of himself as repository of Burroughs’ artistic spirit: “William and I sitting across from one another at a table (black and white) lots of Blinding Sun from the windows behind us holding hands staring into each others eyes. He gropes me from behind and falls dead on top of me. Medical footage of sperm flowing through penis. A ghost vapor comes out of his chest and groin area and enters me Body.”

Burroughs wouldn’t do the video, so Cobain used a generic old man on a cross and pecked at by crows. To him, birds also symbolized old men advocating death: “Me–old man,” he writes. “Have made my conclusion. But nobody will listen anymore. Birds [are] reincarnated old men with tourrets syndrome . . . their true mission. To scream at the top of their lungs in horrified hellish rage every morning at daybreak to warn us all of the truth . . . screaming bloody murder all over the world in our ears but sadly we don’t speak bird.” Clearly, Cobain spoke bird.

In October 1993 Cobain met in Burroughs in Lawrence, KS.

During this first week of the tour, Alex MacLeod drove Kurt to Lawrence, Kansas, to meet William S. Burroughs. The previous year Kurt had produced a single with Burroughs titled The “Priest” They Called Him, on T/K Records, but they’d accomplished the recording by sending tapes back and forth. “Meeting William was a real big deal for him,” MacLeod remembered. “It was something he never thought would happen.” They chatted for several hours, but Burroughs later claimed the subject of drugs didn’t come up. As Kurt drove away, Burroughs remarked to his assistant. “There’s something wrong with that boy; he frowns for no good reason.” 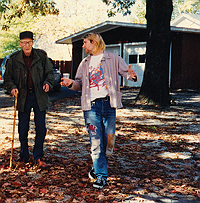 Burroughs describes the meeting… “I waited and Kurt got out with another man. Cobain was very shy, very polite, and obviously enjoyed the fact that I wasn’t awestruck at meeting him. There was something about him, fragile and engagingly lost. He smoked cigarettes but didn’t drink. There were no drugs. I never showed him my gun collection.” The two exchanged presents — Burroughs gave him a painting, while Cobain gave him a Leadbelly biography that he had signed. Kurt and music video director Kevin Kerslake originally wanted Burroughs to appear in the video for “In Bloom.”

“I’ve been relieved of so much pressure in the last year and a half,” Cobain says with a discernible relief in his voice. “I’m still kind of mesmerized by it.” He ticks off the reasons for his content: “Pulling this record off. My family. My child. Meeting William Burroughs and doing a record with him.

In Lawrence, meanwhile, William Burroughs sat poring over the lyric sheet of In Utero. There was surely poignancy in the sight of the eighty-year-old author, himself no stranger to tragedy, scouring Cobain’s songs for clues to his suicide. In the event he found only the “general despair” he had already noted during their one meeting. “The thing I remember about him is the deathly grey complexion of his cheeks. It wasn’t an act of will for Kurt to kill himself. As far as I was concerned, he was dead already.” Burroughs is one of those who feel Cobain “let down his family” and “demoralized the fans” by committing suicide.

A group calling itself “Friends Understanding Kurt” faxed a press release to various news organizations, claiming a “string of suicides associated with the [dream] machine since the 1960s.” The press release stated after he obtained one of the devices, “Kurt immediately commenced a habitual, perhaps maniacal use of the Dream-machine, then took it with him to his and Courtney’s shared Seattle mansion where he stationed himself with the device in a room above the garage.” It stated the Dream Machine was found in the room where Cobain died, although police and medical examiner reports contradict that. Nevertheless, the claims were widely published. William S. Burroughs, who knew Cobain and had collaborated with him, dismissed such speculation as “nonsense…” The Cobain story was ultimately proved to be a hoax.

An old diary of mine from my love affair (marriage) surfaced at Sanctuary today. I read it. I miss being loved by a husband very much… there were pictures of Kurt in there… pictures of Kurt walking with William Burroughs. I really miss him.

A source that wishes to remain anonymous provided these pictures of a painted collage that Burroughs sent to Cobain for his 27th birthday, less than two short months before the singer’s death. 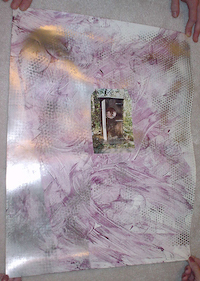 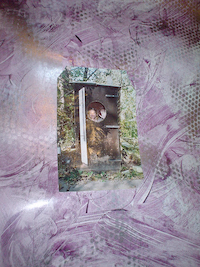 Published by RealityStudio on 18 February 2007. You can download a Russian version of this dossier translated by Boyroid, who also provided a letter that Kurt Cobain sent to Burroughs asking him to appear in a Nirvana video.
Editor Kurt Cobain William Burroughs

78 thoughts on “William S. Burroughs and Kurt Cobain: A Dossier”