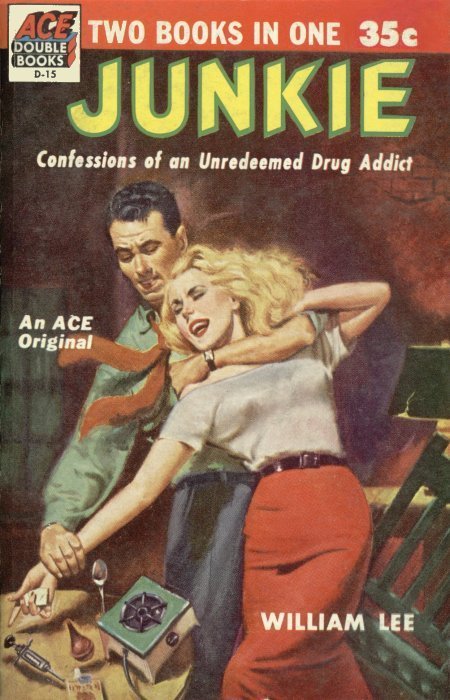 According to Beat legend, the shooting death of Joan Vollmer gave birth to William Burroughs, the writer. Grief and guilt forced Burroughs to the typewriter. The work of recent Beat historians, like Oliver Harris’ William Burroughs and the Secret of Fascination, separates the truth from the fiction concerning this issue. As early as the summer of 1950, Burroughs worked on drafts of Junkie. Yet without a doubt, the writing bug caught Burroughs in full force in the two years after Joan’s death in 1951. Burroughs finished Junkie, began work on Queer, and wrote the letters that would become The Yage Letters. By 1952-1953, Burroughs completed Junkie and Allen Ginsberg scoured his address book and New York for a publisher.

From 1953 to 1957, Burroughs’ published output, meager as it was, hovered between high and low culture. The only publisher willing to put out the shocking drug material of Junkie was the pulp fiction house of A.A. Wyn, Ace Publishing. Junkie with its matter-of-fact, non-judgmental and possibly even celebratory treatment of the drug culture and drug addiction, was almost too hot for Wyn to handle. He published it as a favor to his cousin, Carl Solomon, Allen Ginsberg’s friend from their joint stay in a mental hospital, and only with the book paired with a staunchly anti-drug, pro-law enforcement title, Maurice Helbrant’s Narcotics Agent. By 1957, Junky appeared solo in Great Britain but was again marketed as a pulp fiction. This time the book appeared as a paperback from Digit. Burroughs acts as the square’s Virgil in the Hell of the United States drug underworld. 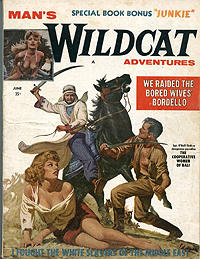 An early magazine appearance, not mentioned in the well researched William S. Burroughs: A Bibliography 1953-1973 compiled by Joe Maynard and Barry Miles, highlights Burroughs’ early roots in men’s magazines. The first issue of Man’s Wildcat Adventures from June 1959 featured excerpts from Junkie alongside sensationalistic material such as “I Saw the Djiek Women Eat Their Mates” and “I Raided the Bored Wives Bordello.” The magazine also ran racy photo pieces of scantily clad women. While Junkie contains little to no sexual material, the honest portrayal of the drug underworld was salacious enough to appeal to the baser appetites of male readers prowling the drugstores and magazine racks for cheap thrills. In the 1950’s, Burroughs’ drug narrative was viewed as part horror story, part pornography.

Although he left the pulps behind, throughout his literary career, Burroughs would periodically find himself in men’s magazines, such as Swank, Cavilier, Jaguar, Penthouse and Playboy. In magazines such as these, the high quality of Burroughs’ writing would add literary weight while still delivering a good bang for the buck to more low-minded readers. This is especially noticeable in magazines like Olympia Magazine or the later issues of Evergreen Review which dealt in controversial literature struggling with the censors as well as tasteful nude pictorials. Burroughs’s relationship with Mayfair, a British men’s magazine, deserves special mention. In the late sixties, Burroughs wrote “The Burroughs Academy Bulletin” column for several issues. This forum allowed Burroughs to speak out on current issues important to him. More on this aspect of Burroughs’ literary career later. Jack Kerouac wrote a similar column, “The Last Word,” for the men’s magazine Escapade in the late 1950’s and early 1960’s. 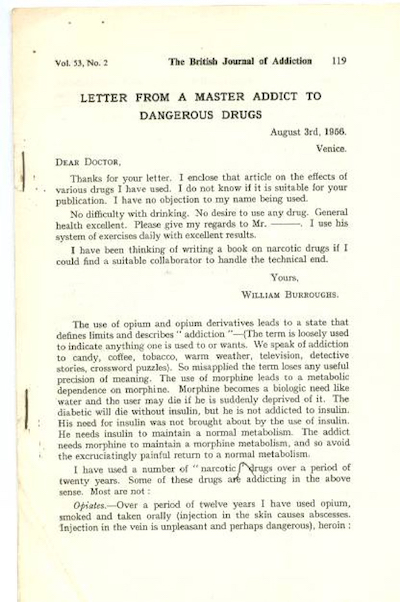 Burroughs’ only published effort from the 1953-early 1957 period beside the pulp publication of Junkie lies at the other end of the literary spectrum. In January 1957, Burroughs appeared in Volume 53, No 2 of the British Journal of Addiction. The journal printed Burroughs’ “Letter from a Master Addict to Dangerous Drugs,” written in August 1956. The letter resulted from Burroughs’ relationship with Dr. John Yerbury Dent as Burroughs attempted to kick his drug habit which completely debilitated him. By 1956, Burroughs’ life reached a standstill. He shot heroin several times a day and spent his remaining hours staring at his shoes watching life pass him by. Dr. Dent’s Apomorphine cure allowed Burroughs to kick opiates and begin in earnest the next stage of his writing career.

In the Journal, Burroughs’ no-nonsense, man-on-the-street approach to drugs found a more academic audience. Burroughs tells the same story he told in Junkie, but in an even more authoritative and academic manner. In 1944 in a New York apartment, Herbert Huncke initiated Burroughs into a whole new world. The student became the teacher/writer. Burroughs presented himself as an expert on a little known section of the United States that captured the public’s imagination. Huncke taught class at Bickford’s or under streetlights on 103rd Street; Burroughs talked hip in the pulps and men’s magazines or lectured in academic journals. 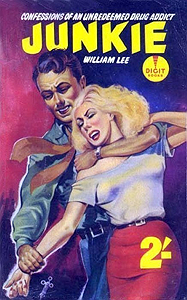 Junkie appeared under the name William Lee in order to protect his family from the embarrassment of their son’s drug addiction and lifestyle. Yet Burroughs published his letter in the British Journal under his own name. Carol Loranger argues that “Letter from a Master Addict” is “one of Burroughs’s most subversive pieces of comic writing.” The “Letter” is full of comic asides and odd anecdotes that disrupt the academic tone of the article. Burroughs can be seen as parodying the academic article in much the same way he will later utilize parody in Naked Lunch. The solemn reporter of Junkie transforms into the sardonic hipster with the deadpan delivery of Naked Lunch. In a doctor’s journal, Dr. Benway is born.

Clearly, the British Journal was more prestigious than a pulp paperback. The name change shows not so much shame in his past experiences but the extent of his literary ambition. Burroughs felt he was a master writer as well as a master addict. His writing deserved mainstream publication and recognition. Teenagers in drugstores could not appreciate the complexities of great drug literature. By 1957, Burroughs’ creative output would begin to appear in a more literary arena: the little magazine. William Lee had become William Burroughs. William Burroughs was ready to unleash his word horde.