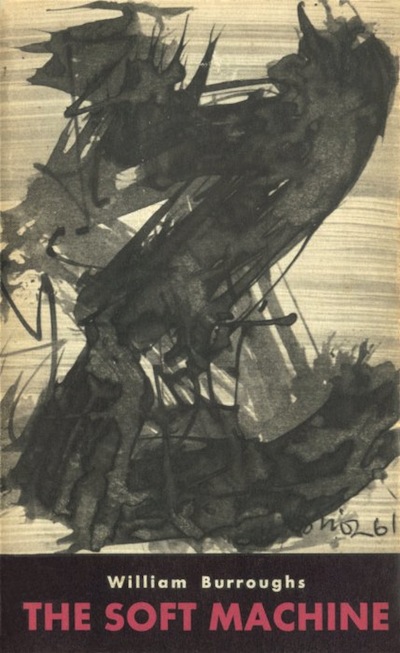 William Burroughs’ personal copy annotated in 1964/1965. The notations are in Burroughs’ characteristic tight script. Proper and reserved. The color scheme of the novel has not been repeated in the notations, which are in uniform black pen of an unvarying shade. Apparently the same pen was used for all notations, which suggest uniformity. “Magic marker” might have been used on galleys or later edit, not this initial attempt at editing. The dust jacket is carefully folded and tipped into the front cover. The condition of the book, particularly the wrappers, is near mint, which is surprising given Burroughs’ constant movement in the mid-1960s. The book presents a dignified, business-like appearance. Although the green cover stands out in a bookshelf, this is not the result of a garish jacket, but is conspicuous in the manner of a finely-tailored, monochrome suit, much like Burroughs himself wore. Location: New York Public Library (formerly the Jackson Collection).

I’ll be your mirror / Reflect what you are, in case you don’t know. Annotating a book is a form of reflection; to annotate your own writing is to stare into a mirror. While Burroughs wrote, at the Beat Hotel, what would become the Olympia Press edition of Soft Machine, he and Brion Gysin experimented with scrying — gazing into a mirror in order to get into one’s head and to look into one’s soul. According to Literary Outlaw, “When Burroughs tried mirror-gazing, he saw his hands in the mirror with the fingers amputated, looking completely inhuman, black-pink and fibrous, with long white tendrils growing where the fingers should have been.” Morgan adds, “Burroughs wasn’t sure what was going on, but the paranormal phenomena were flying thick and fast. He felt that he had crossed an important barrier, and that he was in a very dangerous place, but there was no going back.”

The Olympia Press Soft Machine crosses the important barrier of taking prose into poetry. Commercially this is a very dangerous place. The book was and is a desert island classic, a book to jump into and get lost in. Difficult, cryptic, obscure. In the mid-1960s, Burroughs re-wrote The Soft Machine for publication by Grove Press and then again for publication by Calder. Burroughs’ near mint copy of the Olympia Press Soft Machine with its crisp green wrappers demonstrates Burroughs preparing himself for public display. The black-pink, fibrous authorial hand of the Olympia Press Soft Machine had to be manicured. As Burroughs writes in a December 23, 1966 letter to Gysin, “I dare say many ‘phosphorescents’ and ‘iridescents’ fell to my magic marker.” Maybe amputated is the better word. Burroughs again: “I went through the original edition and used all the material that was in any way usable and the material I added was grafted on with some care, a little scar tissue is unavoidable in such cases.”

The Grove Soft Machine is not blissfully experimental like the Olympia Press Soft Machine with its elaborate color schemes and whiff of poetry. Burroughs’ annotations are tight, legible and compact, unlike the fevered holograph appearing in the “lost” notebook from Peru edited by Oliver Harris. Yet like the notebook, the Olympia Soft Machine bears the print of Burroughs’ amputated finger. The Burroughs of passion, desire, and obsession. The Burroughs of poetry. To prevail in the court of public opinion, this evidence must be removed. The verdict: “Everyone I have talked to who has read the Olympia edition and the revised edition says they find the revised edition much more readable.” (Letter to Gysin 12/23/66)

The Grove Press Soft Machine is all business. The wild poetics of the original version have been trimmed and tightened, placed in the Grey Flannel Suit of narrative. Burroughs’ annotated Olympia edition reveals the grooming process. This is a controlled Burroughs taming an unruly poetics. The edits are surgical and precise. Deletions are struck through with a steady hand, seemingly with a ruler. There is no evidence of doubt or regret. Burroughs as homo economicus. The annotations are as cold and rational as the philosophies of Adam Smith and John Stuart Mill. They were written by the Invisible Hand, thus erasing the mark of the long, white tendrils of poetry.

Written by Jed Birmingham and published by RealityStudio on 31 October 2012.